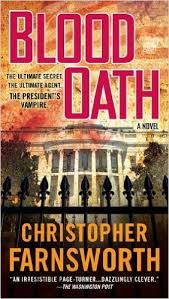 Now that I've started thinking about urban fantasy and how it's not really being exploited beyond the shifter tropes, I can't seem to turn it off. I once wanted to write a story about the OSS interacting with a vampire in Eastern Europe, and I may have to pull out those notes (yes, they predated my computer) and play with them. Because it occurred to me that if you were a werewolf or a vampire, you would make a most excellent spy.

Googling around with "vampire spy" led me to the Nathaniel Cade series by Christopher Farnsworth. The first book in the series, Blood Oath, sprang from the seed of a story that Farnsworth heard about President Andrew Johnson pardoning a man who was accused of being a vampire. There are apparently three books in the series to date and producer Lucas Foster has plans to turn the "President's Vampire" series into a movie. Sounds good to me.
Posted by Katherine Tomlinson at 4:09 PM