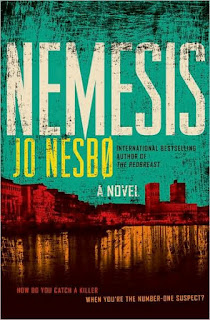 In Nemesis (now out in paperback) Jo Nesbo’s melancholy, alcoholic detective Harry Hole looks into the murder of his partner while solving a bank robbery that’s actually more complex than it looks.
Bank manager Stine Grette has been gunned down by a robber, even though he got away with millions of kroner.  Harry teams up with nondescript detective Beate Lønn, who spots numerous little details he’s missed, and the two of them are convinced that there’s a larger crime behind the crime they’ve witnessed.
Harry, though, is somewhat distracted. His ongoing obsession with the murder of his partner (beaten to death by a baseball bat) continues to affect his work, and a woman from his past has shown up just as Rakel, his current girlfriend, flies to Moscow to deal with her young son Oleg’s father, a Russian who wants custody of the boy.
When the woman from Harry’s past, Anna, ends up dead, his past and present suddenly collide in a very violent way.
What begins as a bank robbery gone wrong gradually opens out into something much, much bigger, as Harry looks for answers and seeks closure in a more personal matter.  (The book ends on a cliffhanger.)
The bank robbery case is not that riveing, even when it opens out into something bigger and we grow weary of the procedural elements of the story.  We’ve all seen CSI and Forensic Files, so the details of things like Beate’s 3-D modeling neither impress nor amuse us.  We’ve seen it all before and one in a much “sexier” manner.
In fact, the whole book seems understated, even in its moments of most extreme violence.  There’s something to be said for the matter-of-fact portrayal of violence.  It isn’t glorified and it isn’t amped up.  But we are so used to seeing stylized violence that something more realistic is …. Boring. And there are lots and lots of coincidences around.
Still the characters here are strong, with some inspired bits, like finding out Harry is something of a foodie when he runs into his boss, Bjarne Møller in a Pakistani grocery store where they’re both buying chilis.  Harry is a wounded man, fundamentally broken in some ways.  That makes him a good character because happy, well-adjusted people are so rarely interesting.
The resolution of the subplot involving Harry’s relationship with Rakel and Oleg is very satisfying, though, and offers a glimpse of hope for him in future books.
Harry’s colleagues have their own things.  His office mate is competitive, for example, and doesn’t really understand him.  Ivarsson is a jerk.  Bjarne is a good guy and long-suffering (the familiar long-suffering cop boss we’ve seen in television shows for years.)  Tom Waaler, Harry’s nemesis, is far more interesting than Harry is, but fans of this kind of material will spot him as a wrong one from the get-go.  (To be fair, the writer sets up the suspicion with Harry’s insistence that there’s something not quite kosher about the way he closed his partner Ellen’s murder case so abruptly and decisively.)  We love that Bjarne comes to Harry’s defense, as he often does, even when this time it looks like Harry has really done something wrong.
The women in the book have their moments, but it’s Ellen’s ghost that looms over all of them.  Even as Harry is going about his daily business, a photo of her hangs in his office.  Even when he’s sleeping with Anna or talking to Rakel, she is a third party to the conversation or the act.  It’s clear that the story of her death was part of an earlier book in the series and the final short chapter of the book suggests that Harry’s inquiry into the circumstances of her death is not over, that there will be reverberations into the next book.  Unfortunately, we don’t really care.  A lot of the revelations that come out (like Beate’s body language discovery) are just not surprises to people who enjoy this genre of material, or watch a lot of true crime television.
The best thing about the book—the meticulous local color; the worst?  Somewhat sloppy translation in parts, when the English word used is totally wrong in context of the sentence.
Fans of the series will enjoy this entry, others might want to start from the beginning as the stories are connected from novel to novel.
Posted by Katherine Tomlinson at 1:36 PM