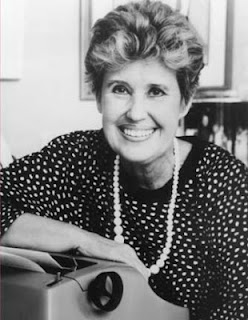 When I was growing up there were a number of women writers whose stories of family life were published in magazines like Ladies Home Journal and McCalls and Good Housekeeping and in newspapers coast to coast.  There was Jean Kerr (wife to theater critic Walter Kerr and author of Please Don't Eat the Daisies), there was Peg Bracken of the I Hate to Cook cookbook. (Great recipe for oatmeal cookies but most of the other recipes are ...let's just say the title is not a joke.)
And then there was Erma Bombeck, whose obituaries described her as a "housewife humorist" when she died in 1996 at the age of 69.
Doesn't that sound ... dismissive? The "housewife humorist" had an audience of 30 million readers in 900 newspapers in North America. From 1965 until her death, she wrote more than 4000 newspaper columns. Every once in awhile when I'm looking for a recipe in one of my mother's cookbooks, I'll find a Bombeck column that she cut out and used as a bookmark. They always make me smile. "Housewife humorist?" I guess people need their labels. But she was no hobbyist proto-mommy blogger, the lady could write.

When I stand before God at the end of my life, I would hope that I would not have a single bit of talent left, and could say, 'I used everything you gave me'.--Erma Bombeck (See more quotes here.)

Posted by Katherine Tomlinson at 10:06 PM