It's Here--Drunk on the Moon! 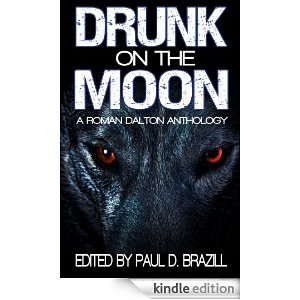 Drunk on the Moon, the anthology of stories based on the werewolf/private investigator character created by Paul D. Brazill is now available at Amazon and OmniLit. (It'll soon be available in other stores, including B&N, but they take longer to publish.) This is the e-pub version. The print version will be out early in May.
There are 11 stories in all--including a prequel by Brazill, and the stories were gathered from an international group of writers--Julia Madeleine, John Donald Carlucci, Richard Godwin, K.A. Laity, B.R. Stateham, Paul D. Brazill, Jason Michel, Frank Duffry, Allan Leverone, and me!!
My story, "A Fire in the Blood" features Roman facing off against a Persian fire demoness with the help of another wolf and a mysterious freelance pharmacist.
The stories offer a little something for everyone, and shortly there will be blurbs, including a lovely review from Les Edgerton. The book is $2.99 and well worth it.
Posted by Katherine Tomlinson at 4:32 PM