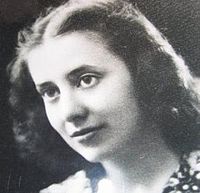 It is Feminist Fiction Friday and I'm fried. I am in week three of the computer changeover from HELLLLLL and last night it took a new and even more annoying turn as we switched over from the Google Cloud to the Microsoft Cloud. Only one of my email addresses works, and it's not the one I use for business. Only one computer (the new one) is linked to the printer but that printer doesn't have word installed at the moment since we were going to try Google Docs.  Grrrr.
So I'm feeling pretty sorry for myself. And then I read about Musine Kokalari.  She was an Albanian writer (the first female Albanian writer) who was persecuted after the Communists took over in her country, imprisoned for 18 years, prohibited from writing after that and died in poverty in 1983 after being forced to work as a street sweeper. According to Wikipedia, when she was terminally ill with cancer, she was refused a hospital bed.It's really hard to find any of her work. Her novel Vepra is available from an amazon affiliate seller for $39.