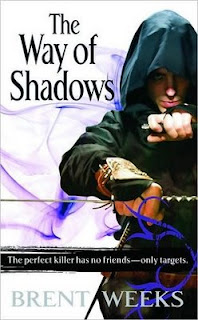 I used to read a LOT of fantasy in my teens and twenties and I hoovered through all the multi-book sagas and story cycles out there. I was a big fan of Susan Cooper's books, and Guy Gavriel Kay and the Deryni Chronicles. I especially loved Robin McKinley's Beauty and Patricia McKillip's novels. And Anne McCaffrey--loved the Dragonriders series. Somewhere along the way, though, all the books started to feel the same. Maybe it was because a client hired me to read all five thousand Dragonlance books and synopsize them.  Whatever it was, I pretty much stopped reading the genre for years.  And then I read Brent Weeks' Night Angel: The Way of  Shadows.  The timing was perfect. I'd just geeked out on the first season of Game of Thrones and was ready for something complex and compelling to get me through to the second season.  (I made the decision not to read the books because I don't want to know what's coming.  If I'd known what was going to happen to Ned Stark, I'm not sure I could have watched.)
I thought Night Angel was fantastic and was very happy to discover that ... there are more books in the series. In fact, the complete trilogy is now available.  If you love densely plotted stories of fantasy, you will love this series. Here's my review:

Night Angel:  Way of the Shadows is a richly textured, multi-layered fantasy crowded with characters who have substance and cast shadows. It is a coming of age story played out against a backdrop of politics and magic, The first of Brent Weeks’ epic story cycle, it compares favorably to George R. R. Martin’s “Song of Fire and Ice” books in terms of complexity and world-building.
The relationship between an orphan “guild rat” and a master assassin named Durzo Blint is at the heart of the story, but both Durzo and the boy have lives that connect to a web of other people.  Durzo warns his apprentice that “love is a noose,” but by the time they meet, it’s already too late for the boy to heed the warning.
This is an epic story filled with darkness and cruelty but also stuffed with terrific characters, great friendships, large themes and genuine emotion. The early chapters are especially grim, and almost unbearable at times, but also familiar to us—the fantastical extension of Dickens’ version of poverty.  This world is not sentimental and those who escape the pull of the Warrens are grateful for their reprieve.
The world-building here is outstanding, on a par with Frank Herbert’s Dune or J.R.R. Tolkien’s Middle Earth, or the afore-mentioned George R. R. Martin’s Seven Kingdoms.  There is very real magic here, with “talents” that range across many different disciplines and mages that must hide their magic. There are places where a fan of the genre can almost identify the author’s influences (because they’re the classic books every fan has read) and he hits all the tropes and memes out there.  Which is not a bad thing.
This is a “Chosen One” story, filled with humble beginnings and magical artifacts, and impossible loves, and politics both personal and grand. The chance for betrayal is everywhere and not necessarily because those doing the betraying are traitors.
The characters here are richly dimensional and both men and women are heroes and villains. Some are even both. And unlike a lot of fantasies where even the magical creatures all seem to be white and blonde, there are characters with darker skins (like Jarl) and ambiguous sexuality. Women are just as likely to run things in this book as men, and no aspect of society is denied them.
There are families by birth and blood but also by necessity (like Jarl, Doll Girl, and Azoth). Durzo lives by the concept that “love is a noose” and yet he loves his apprentice and allows the king to manipulate him in order to protect his daughter.
The politics of the backdrop are convoluted in the way that actual politics are convoluted.  The identity of the Shinga—the one who controls the criminal network that dominates the realm—is a true revelation and comes out of nowhere the way a good secret should.
Bad things happen to good people.  Little children are mutilated, good women are murdered, people die and are hurt and are ruined. And yet, nothing feels gratuitous.
There is sex and there is death and there are magic swords and mad Godkings and well, just about everything you might want in a fantasy.
And when you’re through—there are more books to read.
Posted by Katherine Tomlinson at 9:21 PM