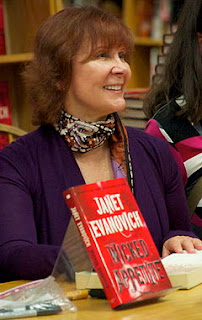 I’ve always thought that Janet Evanovich’s Stephanie Plum novels were Nancy Drew adventures for big girls. Stephanie is smart, pretty and always solves her mysteries. Instead of just one boyfriend, she has two, and instead of chums like “George,” she hangs around with a former hooker, but she’s
I’m not sure when or why I picked up Janet Evanovich’s first Stephanie Plum novel, One for the Money, but I laughed all the way through it. It was a mystery but it had large dollops of humor and romance, and Stephanie was a Jersey girl with money problems and curly hair that never seemed to want to stay in a pony tail.  I liked the character and I loved the book and from then on, I was hooked on the series.
In fact, I always thought the books would make a great television series because Evanovich surrounded Stephanie with a great cast of characters. There are the people at the bail bonds office (including her cousin). Her parents (particularly her long-suffering dad) are always around to offer sympathy and pot roast. And then there’s her Grandma Mazur, whose idea of entertainment is heading over to the local funeral home for viewings. (That funeral home figures prominently in a couple of the books.) And then there are the two men who are both pursuing our heroine.
These are people we could actually know.
And while some of the hijinks in the stories get a little out there, her brand of contemporary romantic suspense set the bar for writers who followed.
She started out writing romance novels, turning to fiction in her 30s and publishing her first book in 1987 when she was 44 years old. One for the Money came out in 1994 and kickstarted a series that includes 18 “by the numbers” books and a couple “between the numbers” novels as well.
And in between she’s written a slew of other books, both alone and with other writers a la James Patterson. (According to Wikipedia, she and the late Stephen J. Cannell were supposed to have written a book together. That would have been one lively romp.) And Castle fans who remember Cannell from the poker playing scenes, wouldn't it be fun to see Rick Castle playing poker with Janet?
You can follow her on Twitter @janetevanovich; like her on Facebook; and sign up for the newsletter on her site.
And you can go to see the movie version of One for the Money today, with Katherine Heigl as Stephanie.
Posted by Katherine Tomlinson at 11:14 PM