Review of iBoy by Kevin Brooks 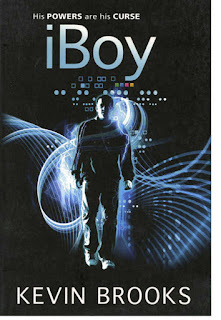 This is a really smart take on a modern “origin” story for a 21st century superhero. The model is Spider Man (mentioned more than once) but the hero’s transformation is more like the film Lawnmower Man. It’s somewhat inward (as if he’s internalized the Matrix) but this is the rare story where what’s going on around the “superhero” story is probably stronger than the heroics. The writer does something really cool with point of view and it’s so subtle that it takes awhile to register. Gritty and human and scary, the book has an edge but it also has a heart.
The premise sounds a little … silly … at first. After surviving a brain injury caused by a falling cell phone, an ordinary teenager named Tom discovers he now has the capacity to do anything an iPhone can and more and uses those powers to exact a little vigilante justice. There is nothing silly about how this premise works itself out, or anything candy-coated about iBoy’s mission. He wants justice done and although he doesn’t like the consequences, he can live with the results. (He would fit right into the Watchmen’s pantheon of superheroes with damaged souls.)
The characters are terrific. Tom is only 16 but as he integrates the iBoy powers, he’s forced to confront concepts like “situational ethics” and deal with criminal dynamics way over his head. Tom’s friend Lucy is equally as strong. She undergoes a horrific ordeal and emerges feeling dead and ruined. By the end, though, she has summoned reserves of courage and grace that will stand her in good stead.
The villain of the story, a local gangster named Howard Ellman (nicknamed “The Hell Man”) is a true sociopath and we know he’s capable of anything.
The writer has also done an excellent job of seeding in various elements of the plot that grow to fruition as the story rolls on. He’s not always subtle about this—there’s a patch of waste ground that’s a cell phone sink where iBoy’s powers don’t work and once Tom makes note of that, we’re pretty sure we’re going to see it again.
The council estate where Tom and the other characters live is a bleak place that reflects 21st century realities. The towers and flats are filled with gang members and even the residents who aren’t a part of the thug life find themselves caught up in it.
While there is a fantastic element to the story, at its heart, everything that happens is very real. A young girl is raped for no better reason than her attackers want to send a message about power. A skinhead psycho keeps younger gang-members in check with ruthless displays of death-dealing. A mischief-making text sent by Tom results in a young man being stabbed—which is what he hoped for but doesn’t completely like.
Brooks is known in the UK for his books Martyn Pig and Being. iBoy is his best book yet.
Posted by Katherine Tomlinson at 9:10 AM