Review of The Killing of Emma Gross 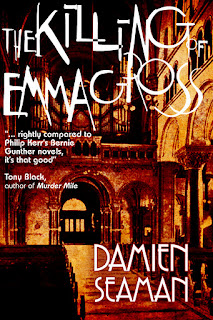 The Killing of Emma Gross by Damien Seaman

March, 1929…a prostitute named Emma Gross is killed in a Dusseldorf hotel room and her body mutilated so the wounds mimic those borne by two other murder victims. Johann Stausberg confesses to all three crimes and is sent to Grafenberg Asylum for the criminally insane. That should have been that, but a year later, the arrest of serienmörder (serial killer) Peter Kürten brings to light certain discrepancies that investigating officer Thomas Klein simply can’t ignore. And it doesn’t hurt that proving Johann Stausberg didn’t kill Emma Gross will humiliate his ex-partner Michael Ritter who has hated him ever since learning of Thomas’ affair with his wife Gisela.
Damien Seaman’s debut novel, The Killing of Emma Gross stuns the reader like a blow from the claw-hammer wielded by one of its characters. The novel is equal parts police procedural, psychological thriller and dramatic deconstruction of a love affair gone very, very wrong. This is a plot that involves secrets and lies buried so deep inside that winkling them out involves blood and pain on an epic scale.
For everyone but Thomas, the question of “Who killed Emma Gross?” is less important than “Who cares who killed Emma Gross?” and the closer Thomas gets to answers, the more questions surface. This is not a simple book and Thomas is not a simple character. A veteran of the Great War, he is scarred inside and out from the experience, but traumatized even more by the death of “Lilli” and his wretched love affair with Ritter’s wife.  He is capable of mistreating people in his search for the truth, but he’s also susceptible to moments of what he calls “softness.”
He is utterly appalled and repelled by the bond Peter Kürten wants to forge with him but forced by circumstances to nurture that relationship in order to get information he hopes will save a little girl’s life. Peter is a total sociopath who enjoys his little jokes at Thomas’ expense, and who tries to arrange to have his wife collect the reward money  offered for information leading to his arrest.
Everyone wants credit for bringing “the Ripper” to justice, and the game of ambition being played out in the Dusseldorf police station is complicated by the arrival of Ernst Gennat, an investigator from Berlin who suspects that all is not what it seems but who has no interest in upsetting the status quo, at least not openly. He is, however, not above giving Thomas tacit permission to probe all he likes—so long as there’s plausible deniability back at the station.
Some reviewers have compared The Killing of Emma Gross to Philip Kerr’s Berlin Noir novels featuring private detective Bernie Gunther, but Seaman’s work most resembles that of novelist/historian Caleb Carr, particularly his third novel Angel of Death. Like Angel of Death and its prequel The Alienist, The Killing of Emma Gross weaves real people—pathologist Karl Berg, murderer Peter Kürten, Chief Inspector Ernst Gennat, victim Emma Gross—into a plot filled with original characters so seamlessly that it’s impossible to tell where invention takes over. 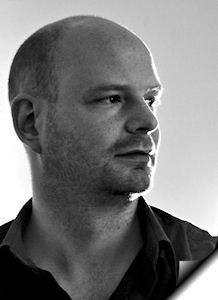 The story plays out against an historical backdrop that is subtle—a comment about the economy here, a description of a decadent nightclub there . The rabid paranoia attached to the Communists becomes part of the plot as the investigative reporter Du Pont embarrasses the police by uncovering their incompetence and pointing fingers at their ineffectual investigations. Thomas, for all his irreverence, is not entirely immune to the zeitgeist. At one point, he tiredly admits to himself that there are arguments for sterilizing “the criminal classes.” Since Thomas is a “good German,” we want to think he’s only joking, but we know what is to come in a decade and so the remark is chilling.
Seaman, who has lived in Germany, salts his dialogue with the kinds of phrases not taught in high school classes, words like the epithet arshloch, a term that needs no translation.  The variety of derogatory words his characters use for “prostitute” seems indicative of a culture that was fascinated by illicit sex.
With The Killing of Emma Gross, Seaman turns lurid fact into brilliant fiction.

Disclaimer:  I review books for a number of sites as well as here on Kattomic Energy. I receive free review copies from many publishers. I am not paid by these publishers for my reviews, which reflect my honest opinions.
Posted by Katherine Tomlinson at 2:13 AM