Seeking a Plus One by Tabitha Bree 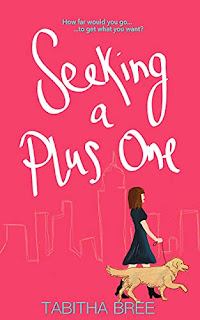 Seeking a Plus One by Tabitha Bree

We meet our heroine Alexis in the middle of a job review from hell and she is instantly relatable. And that’s even before she has to deal with the entitled coworker who spends his days writing features and playing ping pong with one of his bros while she’s toiling in the obit department of their online newspaper and proofing ads on the side for barely minimum wage. She’s worked at the paper for seven years, working her way up from intern but because he’s the son of the owner…he walked right into a cushy, high paying job. She hates Robbie Marshall. And when she realizes, as she writing up an obit for a woman who lived a rich full life, that she’s jealous of her. It’s a new low, she thinks, even for a Monday. Then she gets the bad news about her beloved dog Wilson.

This is an enemies-to-lovers book and it’s pretty satisfying. It’s both cozy and steamy (without being clinical) and it touches on some serious issues, like catastrophic medical debt and the hard choices people who are underpaid and underemployed have to make.

As a pet owner who has faced similar experiences at the vet, I don’t quite buy that the doctor wouldn’t do the life-saving surgery before being paid in full—my vets have always worked with me—but we like where Alexis’ priorities are.

This short read is enjoyable and breezy. And the story continues! You can buy it here.

Posted by Katherine Tomlinson at 5:08 AM