How the Grinch Stole Christmas!...Day Nineteen 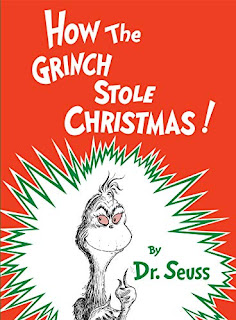 I am pretty sure my father read How the Grinch Stole Christmas! to me when I was a child--he read to me and my siblings every night before bed. And then when I was fourteen, the animated version came out, narrated by Boris Karloff. I have watched that every single year of my life since then.

I have never actually seen the live-action Jim Carrey Grinch, despite all the talent involved. (I'm a hauge Ron Howard fan) becuase I love the original so much. Universal Music group has made the original available on YouTube. You can watch it here. Boris Karloff died two years after making this, and he was so prolific that they were still releasing his movies three years after he died. One of his last roles was on a show called Fame is the Name of the Game, which was a arotating trio of stories under one umbrella. His episode, "The White Birch" was about a group of crusading reporters and a Russian dissident, played by Karloff. I was blown away by his performance. I'd never seen him in anything but the monster movies. (His Mummy remains one of the most chilling I've seen.) Anyway, he was sadly miscast after the monster movies.

The kindle version of the book is actually nine cents more expensive than the hardcover, so I'd go with the hardcover. I had all my childhood Seuss books until a few moves ago when I left Los Angeles. You can buy it here.

Posted by Katherine Tomlinson at 5:21 AM