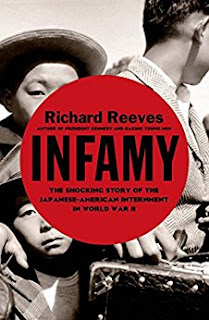 I have a friend who was interned in a camp during the war. She was a child but she still remembers it vividly. She has told me a little bit about that experience and I have tried to convince her to write about it, especially now when President-elect Trump's surrogates are citing the Japanese-American internment camps as proof that similar camps for Muslims will be "constitutional." The memories, she says, are too painful, so I do not press her.

I have visited the Manzanar "War Relocation Center" in California. It's a bleak place and haunted. (Some say it's actually haunted. But take a look at these photos of daily life there, originally published in the Huffington Post.

Infamy is a book you need to read.

Posted by Katherine Tomlinson at 2:50 PM