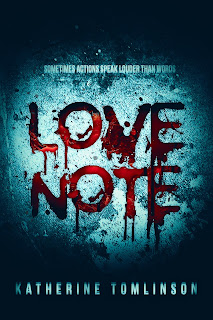 I've been wanting to play around with the psychological thriller genre for a while and even though I'm working on A Woman Presumed, the idea for this one popped into my head and just wouldn't leave. It seems to me that Love Note is going to be short, probably not more than about 12,000 words, so it's yet another not-novel I've written during NaNoWriMo.
Sigh.
The cover was designed by bukovero of the Book Cover Designer, whose website is here. What I like about this cover--other than the great font--is the electric blue of the background. I found it really striking.

Posted by Katherine Tomlinson at 9:28 PM