"What can be causing Trumpism? We ask, and seek for an earthquake, or at least a historical oddity or a series of highly specific causal events. The more tragic truth is that the Trumpian view of the world is the default view of mankind. Bigotry, fanaticism, xenophobia are the norms of human life—the question is not what causes them but what uncauses them, what happens in the rare extended moments that allow them to be put aside, when secular values of toleration and pluralism replace them."--Adam Gropnik, "Why Trump is Different--and Must be Repelled" (New Yorker, November 3, 2016)

Gropnik's article is sobering. It's full of facts that counter what's become perceived wisdom. But he 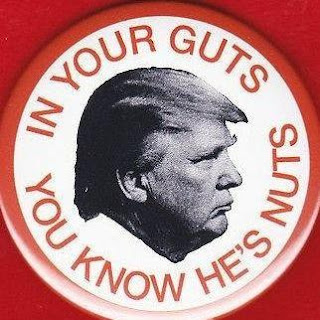 also does something that I think cheapens his article. He uses this phrase, "...so infantile a figure as the orange menace." It's become a standard thing for news stories and blog posts and magazine articles to trot out the metaphors to mock Trump's perennial orange tan. It's often funny. As are the bazillion memes that mockery has generated. (Like the one on the right.)
But as Gropnik says in another part of his article, "there's nothing funny about it." Anything that trivializes Trump makes him seem less dangerous. People were not paying attention when he started his campaign. They enjoyed the spectacle. They laughed and pointed and couldn't get enough of him. And now...he's a heartbeat away from becoming President of the United States. We sowed the wind and we're reaping the whirlwind.

Read the article if you're thinking about voting for Trump. And then go Google "Bill Weld and Trump" to see what the Libertarian candidate has to say about him. (Here's a story from USA Today that includes a link to his appearance on the Rachel Maddow Show.)
Posted by Katherine Tomlinson at 8:05 AM