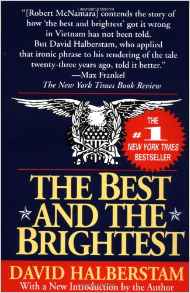 I was a huge fan of writer David Halberstam. I admired his prose so much I even read his book The Breaks of the Game, and I am not a fan of sports writing. (A great writer can make any subject riveting.) The Best and the Brightest is his examination of the way John F. Kennedy's cadre of intellectual advisors ("the best and the brightest") came up with a misbegotten foreign policy that led us into the Vietnam War. (Read it in tandem with The Pentagon Papers or John Paul Vance's A Bright Shining Lie.) The book feels particularly relevant to this election cycle because the personalities involved were all so very, very sure they knew more about things than people who actually had experience about things and against all advice, rushed into terrible, terrible policies.

My favorite book by Halberstam is probably The Reckoning, though. This is from the blurb: Told with panoramic detail and gripping insight, The Reckoning is the inside story of automakers Ford and Nissan—and the collapse of America’s industrial supremacy.  The book was originally published in 1986, but 30 years later, it still feels prescient as we look at the collapse of cities like Detroit.

Posted by Katherine Tomlinson at 2:50 PM

Labels: A Bright Shining Lie, David Halberstam, Johnn F. Kennedy, The Best and the Brightest, The Pentagon Papers, The Reckoning