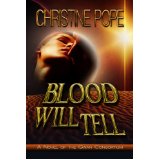 A woman searching for her father’s killer.
A man looking for his next score.
Miala has nothing in common with inter-galactic adventurer Eryk Thorn, but when fate throws them together, they discover they have more in common than an instinct for survival.
Author Christine Pope returns to the sci fi world of Breath of Life in this sexy, savvy space opera.
Blood Will Tell begins with  Miala undercover in the compound of Arlen Mast, the  criminal mastermind who had her father killed. She's determined to take her vengeance and clean out his treasury while she's at it and she's got the hacker skills to do just that.
When fate intervenes and she finds herself in a position to claim Mast's booty, she also finds herself partnered up with the notorious Eryk Thorn, who hides his face under wrappings and keeps his past a secret.
But he's not the only one with secrets, and the longer Miala is around Thorn, the more complicated it gets. And just when we think we know how it's going to end, Pope surprises us by raising the stakes, raising the temperature and raising our expectations. The book is Pope's best yet. Not only that, but this book reads like the first in a series. I can't wait.

Posted by Katherine Tomlinson at 12:57 AM