I played hooky earlier this week and went to see The Best Exotic Marigold Hotel. I didn't really have the time to spare but I knew if I didn't go to see it this week, it would be gone by this week. And I was right. Marigold is not a particularly good movie. Every single plot twist in the film is telegraphed before hand. And yet...messy as it is, predictable as it is, the movie is totally enjoyable. Not the least of the pleasures is watching the actors. Judi Dench. Bill Nighy. Maggie Smith. Tom Wilkinson, Dev Patel (of Slumdog Millionaire). It's kind of like watching an actor's master class.
Nighy and Dench have worked together before in Notes on a Scandal, and although that is a very different movie it has something in common with Marigold--it has a couple of terrific parts for women who are no longer young; who are in fact ... old. Both Maggie Smith and Judi Dench are 78. (Tom Wilkinson is 64; Nighy is not yet 63.) Both Smith and Dench have resumes that go back to the middle of the last century. Dench's first credit on IMDB is 1959; Smith's first listing is 1955.  That's 1955 people--pre-Space Age. 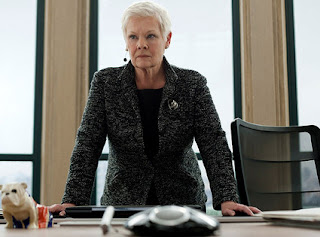 In Marigold, both actresses play women who have been betrayed by the people they love. They're victims who ultimately refuse to be victimized and on their own terms, find happiness. They are not glamorous women. The camera zooms in on their fragile, wrinkled skin and it's a cruel contrast to the lovely, smooth-skinned ingenue who plays Dev's girlfriend in the film. And yet, the stories the audience want to see belong to the older actresses. (Nighy and Wilkinson are terrific in their roles too, but we are talking of women here.) 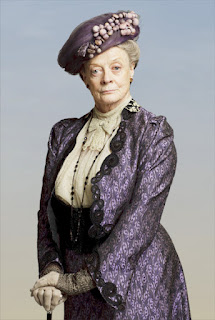 A day after I saw the movie, I started seeing the stills from the next James Bond movie, Skyfall. and there was a photo of Dench as "M" looking...stunning. Judi Dench and I are the same height (5'1") and believe me when I tell you how short that is. And yet...she looks like she could face down a couple of dictators before breakfast and still have time to whip out an economics treaty. In the movies that have always defined a very particular male fantasy, she is the woman in charge. I love that.
Then there's Maggie Smith.  Her role as the Dowager Countess is the reason everyone is so addicted to Downton Abbey. She is playing a powerful woman whose power has nothing to do with sex and everything to do with intelligence and cunning.
I love that these women are still getting terrific roles. As with Helen Mirren (67) and Meryl Streep (63), they are defining what it means to be a woman of une certain age on screen They play women of substance.
Just as I was the oldest person in the audience when I went to see Twilight, I was by far the youngest person in the audience at The Best Exotic Marigold Hotel. I sat behind a row of women in their 80s who loved every single moment of the movie. A lot of movies coming out of Hollywood these days marginalize women, make them into sex dolls and cartoons. But there is hope. Women like movies too--even women old enough to be great-grandmothers. It's nice to see a movie that celebrates life even in the "golden years."

Posted by Katherine Tomlinson at 11:52 PM