I am not a huge fan of Suzanne Collins' Hunger Games. I prefer her wonderful Underland Chronicles, the first of which, Gregor the Overlander, is particularly good. But one thing Hunger Games did, and did really well, is open up the market for books about young heroines who aren't torn between two lovers. Katniss Everdeen is a kick-ass character, and thanks to Collins, she's not the only one out there.
Hugh Howey's Wool (originally self-published as five separate books) features reluctant heroine Juliette who discovers the terrible secret kept by those in charge and ends up the unlikely leader of a growing rebellion. The world of Wool, an arcology that determines status by the floor, with the higher regions reserved for the politicians and those who run things, is worked out neatly. There are a lot of great characters and romance and treachery and political shenanigans. Juliette is thrown into a difficult situation and it only gets worse. it's a very satisfying read and there are clearly a lot more stories to come.
Then there's 16-year-old Yukiko, the heroine of Jay Kristoff's dystopian Japanese steampunk novel Stormdancer due out in September (in the US). It's the first book in a planned series called The Lotus War. check out this site for more information on the book and the world.
If you love that Stormdancer cover (I do), check out the interview with the writer and the artist on Tor.com showing the evolution of the image. 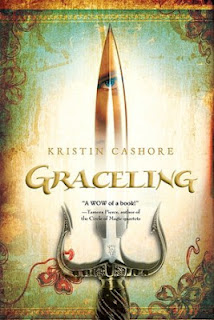 Lauren Oliver, whose lovely Liesl & Po is one of my favorite books, has a series featuring 17-year-old Lena, who has defied the law against love in her Portland, ME community. The first book is called Delirium; the second, Pandemonium, was published in February.
Sixteen-year-old Tris Prior is the heroine of Veronica Roth's Divergent. (The cover art shamelessly evokes the "Mockingjay" logo of Hunger Games, just in case readers don't immediately identify the book's genre.)  Book 2 of the series Insurgent, was published this month.
Graceling actually came out the year before Hunger Games (2009) but its intrepid teenage heroine Katsa is a bold woman whose particular skill is killing. Written by Kristen Cashore, who has written a "companion volume" called Fire.
YA has changed a lot since I was a YA. I love that young women have their own action heroines now. Romance is fine, but give us sword fights too!
Posted by Katherine Tomlinson at 3:45 PM