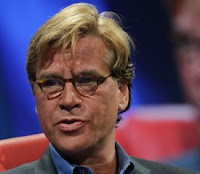 Ever since I saw Station Agent, I've had the nagging suspicion that Peter Dinklage  looks like somebody I' know and today when I saw this picture of Aaron Sorkin on the Deadline Hollywood site, it finally came to me.  Peter Dinklage and Aaron Sorkin look alike. I have worked for John Wells' Productions, the company that made West Wing, and have seen Sorkin a couple of times.  He's got real charisma.
He's also a fantastic writer as everyone who saw Social Network knows.  (He also wrote Moneyball, a movie that was full of fine acting and great moments.) 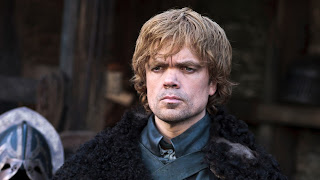 Like everyone else, I could watch Dinklage play Tyrion Lannister the rest of his life. (Only one more episode of Game of Thrones this year?  Noooooooo.) But the project I really hope is still alive is the one based on George Chesbro's books about Robert "Mongo the Magnificent" Frederickson. The book optioned was the third in the series, Affair of the Sorcerers, and Dinklage was attached to play Frederickson.
It's a great role. Frederickson is a criminologist who moonlights as a private investigator, often helped by his brother Garth, who's a cop. "Mongo" was his stage name when Frederickson worked as an acrobat in the circus and his best friends still call him that.
The books started out very real-world, but as the series went on, they got more and more out there.  The last of the books, called Lord of Ice and Loneliness (all the books have really poetic titles) is only available in a French translation; it has never been published in the U.S.
Posted by Katherine Tomlinson at 7:22 PM