Twelve Rooms with a View by Theresa Rebeck 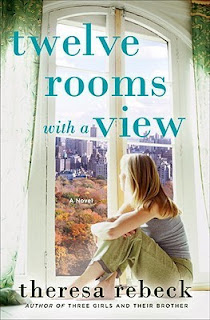 If you're a fan of Only Murders in the Building, as I am, you know there's a dark side to living in those beautiful old buildings that have names. Rebeck's book shares some DNA with that project, mostly because it's told through the snarky point of view of Tina, the youngest of three sisters who may or may not have inherited an apartment in an historic building called The Edgewood. But the chain of events leading up to that inheritance is a little murky (there's another family involved) and then there's the matter of the building's Board. They never liked Tina's mother, or the man she was married to either, who inherited the apartment from his late wife.

The story of what happens when Tina's bossy older sister Lucy (scarily efficient and not empathetic at all) installs Tina in the apartment to establish residency while she and the other heirs fight things out in court is more about Tina finding her self-esteem (and love) than anything else.

There's a lot of fun to be had with the quirky characters, the plot full of twists and betrayals and the little side trips into such topics as moss. Tina is a wonderful character and we cheer for her as she finds allies and learns how to deal with her enemies. There's a particularly delightful little girl named Katherine who figures into the mix, and also a gorgeous socialite the doorman is in love with. Rebeck winds everything up in a very satisfying way, in a way that will send you searching for her other books. She really knows sibling dynamics, and it's a pleasure to watch her move her characters around. The apartment sounds fabulous, and so do the contents of that hidden room!!

Posted by Katherine Tomlinson at 12:29 AM