Hardboiled Wonderland and the End of the World by Haruki Murakami 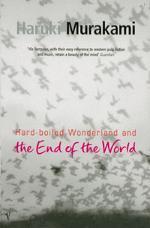 A man whose brain has been altered creates his own reality for an afterlife. This work by Japanese author Haruki Murakami is a wonderful introduction to his work.

In a future world where people are known by their occupations or descriptions, a human data processor called a Calcutec is summoned to a meeting.  What happens next is a story that mixes a stylized reality with a dream world populated by people from the “reality.”

It’s hard to categorize the genre of this book, which slipstreams between science fiction, hardboiled noir, cyberpunk, horror, and literary fiction.  (There’s definitely a little Franz Kafka here.)  The book will remind readers of China Mieville’s The City and the City, with its two different worlds existing simultaneously.

It’s hard to nail down the theme of the book as well.  Murakami is working with a palette that includes ambiguity, consciousness, and self.  In both sections the hero is adrift a bit—an outsider who’s being kept off-balance.

The book is also a dazzling romp through the tropes of pop culture, and cross-culturally (and self-consciously) hip, so it has that going for it as well. Find the book here.

Posted by Katherine Tomlinson at 8:13 AM