Q is for Quincunx 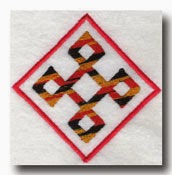 I never quite outgrew the childhood love of silly words that began when my parents first read Dr. Seuss stories to me. I have a particular fondness for words that begin with the letters Q and Z and X. For some reason, they just sound interesting to me. And bonus points for words that use two or more, like EXQUISITE.  That's a word with texture. One of my favorite words of all is QUINCUNX and for a long time, I didn't even know what it meant. (Although it sounded kind of dirty.) turns out a quincunx is a pattern of five arranged with points at four corners and one in the center. IN its simplest form, imagine a quincunx as the five-spot side of a die.But they can also be quite fancy, like this one, which is an ancient alchemical symbol.

The reason I'm thinking of words is that I'm in the planning stages for my novel Zhanghai, which is part of the sci fi series about a planet that's been colonized by a group subsidized by a Chinese trading consortium.  I've been building the world out in notes for about three years now and now that I'm actually sitting down to write, I'm having a good time naming alien species and technologies and artifacts. One of those artifacts has found its way into the hands of Qing, my heroine, and while it looks like a shiny little bauble of no practical purpose, it turns out that it's really quite a valuable thing. I'm calling it the Quincunx because it's a piece that is inserted into a larger piece to ... do something. What that something is, I have no idea, but the whole idea started with a Q.  And a silly word.


Posted by Katherine Tomlinson at 1:21 PM