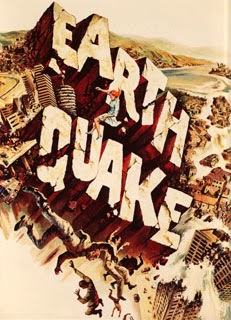 We had a small earthquake in Los Angeles yesterday. Well, small compared to the Northridge Quake of 2004, but still the largest quake in the area since 2008.  It was a sharp jolt that registered 4.4 on the Richter Scale. It was centered in the mountains between Westwood (home of UCLA) and Encino, which is in the western part of the San Fernando Valley, a couple of miles west of where I live.

A 4.4 is, in earthquake terms, relatively minor. You might have a knick-knack fall over (a friend posted a picture of one such knick-knack on Facebook) but there were no reports of damage or injury. But throughout the day, people I know who live elsewhere checked in with me to make sure I was all right. I assured them I was but the truth is, I was actually a bit unsettled. Because to live in Los Angeles is to live in denial. The city is criss-crossed by earthquake faults and one day those faults are ging to go off like a bomb. I've seen the movie Earthquake. I've read the script for San Andreas (soon to be a movie near you with Dwayne Johnson). And more to the point, I have a minor in geology. I know EXACTLY what happens when a couple of tectonic plates slide past each other. (Up until the Northridge quake, most of my knowledge was theoretical, but once you've actually heard the sound of the earth grinding against itself, you don't forget it.)

Anyway, the quake reminded me of Lee Goldberg's book The Walk, which begins "one minute after the Big One."  If you haven't read it, you should check it out.  It's a dandy survival story and would make an excellent movie.
Posted by Katherine Tomlinson at 11:23 AM