Smart is Sexy and Science is Smart

The best teacher I ever had used to insist that "math is fun." And he made it fun with puzzles and tricks and shortcuts. I remember magic boxes. (If  you've never done them, check out a site called allmath.com) Most of my teachers weren't that great, and an algebra teacher I had was downright mediocre. I wish I'd had more teachers like Byron Nelson because if I had, I might have been a rocket scientist or an epidemiologist today.  Instead, once I was done with high school, I never took another math class. 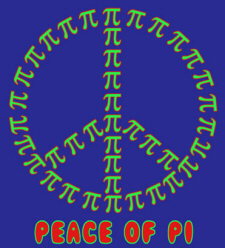 I did take science classes though--biology and chemistry and enough geology classes that I ended up getting a minor in it. (And since I graduated, Dr. Jack Horner's discoveries have pretty much negated everything I learned about dinosaurs.)
Which is all to say that I have an appreciation of science and am thrilled to see sites like Science is Awesome and I Fucking Love Science getting the word out that "science" isn't just some abstract concept meant for misfits but something that can be useful and amusing in real life. Oh yes, we have gone way beyond papier mache volcanoes erupting with baking soda and vinegar. (There is a
GREAT t-shirt place called Science TEEcher that provides geeky t-shirt fun. See the "Peace of Pi" shirt on the above.)
There is a series of new websites going up even as I type called City Science Club. There's one in Portland, one in Seattle and a number of others planned for roll-out shortly. I am going to be reporting for the Los Angeles City Science Club. I hope to entertain and inform and I hope to see you there. More details soon.
Posted by Katherine Tomlinson at 8:36 AM