Science Fiction writer Octavia E. Butler is not mentioned in the Wikipedia entry on women in speculative fiction but Samuel R. Delaney is and so is Robert Silverberg. She's not mentioned in an 1982 New York Times Book Review essay on women and science fiction. That's odd because by 1982, Butler had already published her time-travel novel Kindred and the two Earthseed books:  Parable of the Sower and Parable of the Talents. When the Guardian commissioned a poll of readers' favorite science fiction novels, not one of Butler's works was mentioned, though L. Ron Hubbard made the list. (Butler wasn't the only female SF writer who didn't appear--neither did the multi-award-winning Connie Willis or Joan D. Vinge, though her ex-husbamdVernor Vinge made the list multiple times.) In all 500 readers responded and out of 500 books, only 18 were written by women.  I thought women writers were invisible in the crime fiction world. Our sisters in Sci Fi have it even worse.
Reading Butler's books now, particularly the Earthseed books,  is a bit of a shock because they seem so prophetic. They take place in a world dying of environmental pollution, a place where the underclass is educated just enough to provide employees to run the factories owned by the wealthy. Ordinary services, like electricity, are beyond the reach of most people and only the wealthy have refrigerators. The 1 %, one might say.
Class struggle is a major theme in Parable of the Sower, which was nominated for a Nebula Award for best novel but did not win. (The sequel, Parable of the Talents won the award in 1999.) In the Earthseed books (a third, Parable of the Trickster, was planned but never written), government has broken down and what order exists is a harsh and exclusive Christianity that does not accept any other world view. (Sound familiar?)
Race and sexuality are also constant themes. Butler's first novel, Kindred,  a time-travel book she referred to as a "grim fantasy," is a stark portrait of life in bondage and unsentimental in the way its heroine, Dana, is treated. There are beatings and rape and a complex web of inter-dependence between Dana and Rufus, a white man whose existence is keyed to her own. The book was published in 1979. 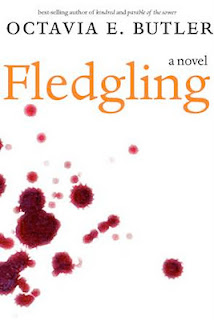 Her final novel, Fledgling (2005) revolved around Shori, a dark-skinned woman belonging to a benovolent, vampire-like race and touched on race and family and prejudice.
Butler won numerous awards in her lifetime, including the 2000 Lifetime Achievement Award in writing from the PEN American Center. She was inducted into the Science Fiction Hall of Fame in 2010.
A scholarship in her name was established to create opportunities for writers of color to attend the Clarion writing workshop. Established by the Carl Brandon Society, the fund has awarded scholarships yearly since 2007.
The Octavia E. Butler Scholarship Fund link is here.
Posted by Katherine Tomlinson at 10:26 AM