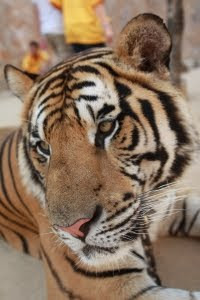 In honor of the Year of the Rabbit, I've posted my story "Tigerbone Wine" over at Dark Valentine Magazine. Here's the link.

When Bailey returned to camp he saw the monkeys had been at the food caches again. Supplies were flung helter-skelter across the clearing where he’d set up his tent. The shiny sealed packages of freeze-dried stew and soup and pasta had been ripped open and shredded, strewn around the area like ticker tape after a parade. The canned goods had been looted but left behind. It was a good thing he liked fruit cocktail. He wondered how it would taste with barbecued monkey meat. He looked forward to finding out … soon.
Bailey freaking hated monkeys. He loathed their wrinkled little faces.
He despised their spidery little hands. He abhorred the whole simian reality of their existence.
The last time they’d been on a trip together, Lina had made a pet of a golden-furred macaque, cooing over it like a child. She’d named it “Bobo,” and told Bailey he was good company when she was left alone while he was out hunting. He let her keep the thing as a pet because it kept her from nagging him about having a baby. As if they could afford another mouth to feed. And besides, Bailey hadn’t had much of a father and he sure as hell didn’t have the father gene in him. Lina hadn’t understood, had kept after him, the way women will, and sometimes he had to get mean to shut her up. Bailey loved Lina, so if keeping the damn thing made her happy, he was happy enough to live and let live.

The tiger photo is by Israeli photographer Slavik Gormah.
Posted by Katherine Tomlinson at 11:34 AM