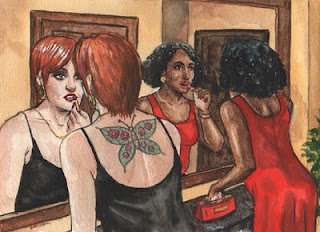 Erika left her husband, James Garrett for Tim and is now pregnant with his child. She's recently moved in with Tim, which annoys James. It's also created anxiety for her son Ty, a smart kid who loves astronomy and animals and his dad.

The illustration is by Mark Satchwill. Here's the opening of the story:

When Lyla Fox saw Rob’s business partner enter the restaurant with his pregnant girlfriend, her first thought was, What’s wrong with this picture? Tim McIlhenny—like the people who make Tabasco he said when they were introduced—was a beefy redhead with skin the color of uncooked tilapia. It wasn’t that he was ugly, exactly, he was just utterly, completely …
A word surfaced in her memory, schnorbelie. It was a word her college roommate Connie had used to describe people like Tim and even though it was a nonsense word, you knew exactly what it meant.
Tim McIlhenny was schnorbelie. Erika Garret, on the other hand, was gorgeous. If Tim had been a movie producer, Lyla wouldn’t have thought twice but a dentist? How’d that happen?

It was clear Tim couldn’t quite believe his luck either. He established his claim on Erika every chance he got. He couldn’t keep his meaty hands off her and nuzzled her all through dinner. He was solicitous to the point of annoyance. I wonder if he’s going to cut her meat for her, Lyla thought as the entrees were served.
Lyla had gotten the mezzalune, which is what she always ordered. Rob had selected the gnocchi with duck ragout. They toasted each other with their forks before they started eating. Erika dug into her meal with the ravenous relish Lyla remembered from her own pregnancies. Tim inhaled his fish and continued the monologue that had begun the moment he sat down. She found herself staring at him with horrified fascination as he talked with his mouth full.

When Rob had first suggested a double-date with Tim and his girlfriend, Lyla had gotten a little giddy. It wasn’t exactly “I want you to meet my family,” but after a month of dating, it was a good sign that their relationship was more than an elongated one-night stand. Now, after listening to him pontificate on everything from the revolution in Egypt to the nuances of the pricey bottle of wine he’d insisted on buying for the table, Lyla was starting to get a headache. When he started talking about a restaurant he wanted to invest in, Rob suggested Tim consult with Lyla on the financials. Tim had smirked. “I’ve got my own money guy,” he said. “No offense Lyla.”
She’d smirked back. “None taken.”
Why do they always want to invest in restaurants? Lyla wondered. Not a week went by that one of her customers didn’t tell her about some great place on Melrose they wanted to buy, dazzled by the notion of being a restaurateur and completely oblivious to the reality.
Even her ex-husband hadn’t been immune to the fantasy. When his first series blew up, the first thing he wanted to do—after buying the Ferrari—was put some of his money into a French bistro in a strip mall in Eagle Rock. She’d told him he’d be better off buying a couple of Subway franchises in Hollywood but back then, she was just his cute little wife who was good with numbers.
“If you cook it they will come,” he’d said, a riff on the famous Field of Dreams line. He’d been an extra in the film, playing one of the ghostly ball-players, and Burt Lancaster had encouraged him to follow his dream to Hollywood.
Her ex had lost a fortune on the restaurant. He’d consoled himself by having an affair with the restaurant’s pastry chef, a sloe-eyed beauty named Laure.

You can read the rest of the story here.
Posted by Katherine Tomlinson at 2:42 PM