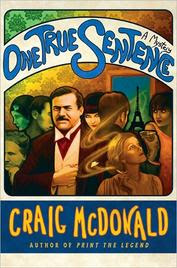 Murder and Paris...what could be more perfect? Craig McDonald's fourth mystery featuring a young Ernest Hemingway and his fictitious pal Hector "Lasso" Lassiter is out and it's a lot of fun.

The plot involves "Lost Generation" writers who are being murdered and the survivors's attempts to figure out who the killer is before one of them becomes the next victim. The plot, though, is almost beside the point. If you enjoy period mysteries (this one is set in 1924), then pick up One True Sentence. It will make you glad you were an English major because you'll "get" all the references.
Posted by Katherine Tomlinson at 11:21 PM