An Excerpt from The Gates Between 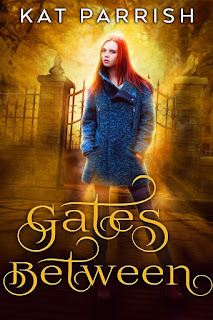 This is an excerpt from my story in Queens of Wings and Storms, now available. The cover was created by Lou Harper of Cover Affairs. I love her work. She has plenty of premades as well as the custom work she does.

THE GATES BETWEEN
by Kat Parrish

Most people believe the gates separating life from death only open one way. That’s not true. What is true is that once you pass through the gates and then return, you are never the same again. I found this out the hard way. I died on my 17th birthday.
And then I came back.
***

I don’t even remember what the argument was about. My stepmother and I fought constantly about everything…everything and nothing. Often our arguments were about me *not* doing something. One day it would be about me not making up my bed.
I kept the door to my bedroom closed, what did she care?
Another day it would be about me not putting gas in the car the last time I used it.
The morning of my birthday, it had been about me not wanting to eat the nutritious breakfast Elle had cooked especially for me, relaxing her ban on eating what she called “flesh” to fry up some turkey bacon. Though why she had even bothered, I don’t know. I usually just grabbed a cup of yogurt on the way out the back door and on the one day—the one day—she decided to do the mom thing and cook up some eggs and bake some refrigerator biscuits, I didn’t want to slow down to bond with her.  It was my birthday and it already sucked.
I was already missing my real mom worse than usual; the idea of making pre-coffee chit-chat with her flawed replacement was not appealing.
It never occurred to me offering me breakfast might be Elle’s way of trying to make me feel better, to start the day off in a nice way. It never occurred to me to give Elle credit for anything, especially not for doing something nice.
My best friend   Kasi told me I was being a bitch when I complained to her about what a big deal Elle had made of me dissing her breakfast.
Kasi’s mother’s idea of cooking breakfast was throwing a box of toaster waffles on the table as she left for her office. “You should be grateful she cares enough to cook for you.”
Maybe, but I was sure Elle wasn’t cooking for me because she cared about me. She just wanted to look good for my father.
Not that he was there. He was hardly ever at home any more, at least not for more than a week at a time before he jetted off to some exotic place to advise his clients on the best way to exploit the natural resources of their or someone else’s country.

Posted by Katherine Tomlinson at 11:09 AM