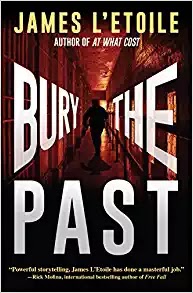 
2.       Do you write both fiction and non-fiction? Fiction and poetry? All of the above? If so, what’s different about writing different kinds of things? I write primarily fiction; procedurals and thrillers. I am in the very early stages of pulling together a proposal for a true-crime project. Fiction work, for me, is rewarding, liberating and cathartic—I get to blow off some psychic steam from working in prison for twenty-nine years. With true-crime, there is a sensitive balance to displaying the crime without it turning into splatter-porn. There are real victims out there… 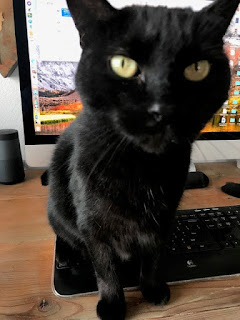 3.       Do you have a writing ritual? A schedule? Or do you just grab the time where you can, shove #NotMyCat off the keyboard and get to it? My most productive writing is done in the mornings. After coffee with #NotMyCat, I’ll park at the keyboard for four to five hours. I don’t really stick to a word count, I’m more of a finished scene writer. When that scene, or chapter is done, then I can move on. When I have a deadline, that’s when I can count on #NotMyCat to camp on the keyboard. (photo)

4.       Do you tend to stick to a genre or do you branch out when you’re writing? Is there a genre you’d like to try? Procedurals and crime fiction thrillers are my mainstay. But, I’ve got the bug to do something a little different and I’m outlining a new thriller with a paranormal twist. No sparkly vampires, sorry.

5.       Did you ever write a fan letter to a writer you admired? If so, did they respond? I haven’t written a fan letter, but attending conferences like Bouchercon and ThrillerFest, I’ve been able to personally tell an author that I liked their latest book. Most seem to appreciate it. I know I appreciate hearing that from someone who’s read my stuff. Hell, even if they didn’t like it—at least they gave it a look.

6.       What’s on your TBR pile? I’ve been piling up the reading list. I’ve got the latest Harlen Coben, Run Away, The Witch Elm by Tana French, The next Orphan X installment by Gregg Hurwitz, and My Darkest Prayer, by Sean Cosby lined up.

7.       Do you ever re-read books? I do re-read some, but it’s different now. It’s more of a reference thing. I’ll pick up an Elmore Leonard book to really pick at the dialogue and look at the nuts and bolts of the thing.

8.       What is the first book you remember reading? The first books I really remember were in junior high; Ray Bradbury, Fahrenheit 451, Orwell’s Animal Farm, Lord of the Flies by William Golding, and Bram Stocker’s Dracula. 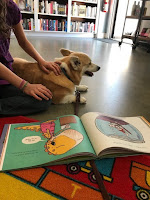 advantage to whatever method was used? Phonics—definitely phonics. We do a reading therapy program for kids and we use therapy dogs for the kids to practice their reading skills. I remember reading out loud in class and it was terrifying. The read to a dog programs let kids practice and read to a non-judgmental dog. And it seems like phonics is making a comeback.  (photo)

10.   Are there some things you write that you wouldn’t want your mother to read (if your mother is still alive)? My mother lived in her own little bubble and if she read my work she’d close her eyes, mumble a quick Hail Mary and go light a candle. 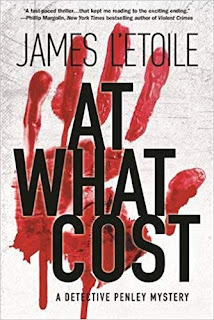 11.   What piece of your work are you most proud of? That’s hard to say. I’m proud of all of it, but Little River was the first commercially published, At What Cost was the first book with a significant advance, and "When the Music Stops" was the first published short story in the Betrayed anthology.

12.   What’s next for you?I have two standalone thriller manuscripts that are ready to shop. My agent has a third she’s looking over and I’m revising a couple of others. And I have that paranormal thriller that I’ve been itching to get to. Busy, but I wouldn't have it any other way.


James L'Etoile's story, "A Deal with the Devil," appears in Strangers in a Strange Land: Immigrant Stories (Down and Out Books, January 25, 2019).
Posted by Katherine Tomlinson at 2:47 PM