The Inspiration for Secret Hexe

As you all know by now, I am part of a boxed set of novels and novellas (Rite to Reign) that's about royal witches. The stories are an eclectic collection--a retelling of the "Little Mermaid," an intriguing take on a familiar Oz figure. The minute i heard the theme of the boxed set, I knew I wanted to write a story about the German princess who became Catherine the Great.


My interest in the empress was partly kindled by Eva Stachniak's wonderful historical novels about her.  But I also have a long-standing fascination with Russian popular culture. I love that beautiful 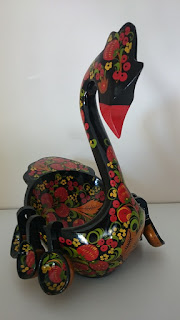 folkloric art that's all reds and golds. I did a lot of research on the Russian space program for a film project and discovered all kinds of weird and strange facts. (True story:  Unlike American astronauts who "splashed down" on their way home from space, Russian cosmonauts landed on the ground. And once, during a Siberian landing, the cosmonaus found themselves chased by wolves.

Wolves figure large in Russian mythology. But so do bears. the national symbol of Russia is the bear. In Secret Hexe, I have a Russian Count who is also a werebear and he's one of the few individuals at court who know Catherine's secret--that she's not just a little princess from a small realm in Germany, she's actually the product of a long process of manipulating events.  Yes, I was inspired by the Bene Gesserit of Dune.

In Secret Hexe, the young princess--named Sophie--is initiated into the witchly mysteries by he nanny, Babette. (that was actually her name. I played fast and loose with the magic, but the history is ALL accurate.)  It was a lot of fun coming up with magic that would make sense to a little girl and also lessons that would be visceral enough to be memorable.

The first scene literally came to me in a dream. And that NEVER happens to me. I almost never remember my dreams. (And wouldn't I like to follow in Stephenie Meyer's footsteps and dream up something like the wildly popular Twilight saga?) But vampires don't really interest me and witches do. So...Secret Hexe is an "origin story" of sorts. I hope you'll read it. I hope you'll enjoy it. I had a blast writing it.

You can find it here at your favorite digital bookstore.
Posted by Katherine Tomlinson at 1:28 PM