Sizzurp--who comes up with these things? 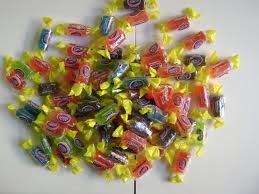 I once knew a guy who was addicted to cough syrup. He was a nurse and knew that his addiction could cost him his job, so he got help and got on with his life. When I first started hearing about "Sizzurp," i figured that was just edgoer slang for the same codeine-laced cough syrup that my friend had favored. But now, thanks to TMZ (yes, I read TMZ. Regularly.), I now know that it's typically codeine and promethazine mixed with Sprite and a Jolly Rancher."
And I have to wonder, who first concocted that particular cocktail of ingredients and decided to try it out?
When I was in college, a favorite party ption was Southern Comfort and 7-Up, which sounds disgusting now, but it was sweet and sparkly and the next step up from wine coolers. It would never have occurred to me to drop a Jolly Rancher into my glass.  (And what flavor is favored?)
These days, I don't drink anything harder than Diet Snapple Half 'n Half,which isn't all that good for me, but at least it's not going to trigger anti-social behavior. Or my gag reflex. Sprite and Jolly Rancher? Yuck.

Posted by Katherine Tomlinson at 12:32 PM