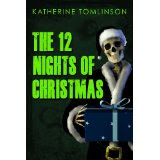 This story is from 12 Nights of Christmas, available here and here in your choice of e-formats for the bargain price of 99 cents. Whatever happened to the "cents" sign on a keyboard? Was it never on a computer keyboard or was it lost in the transition from typewriters to computers? I miss the cents sign.

Four Birds Calling
Reg could see the two birds out of the corner of his eye. They were looking at him and giggling, being none too subtle about it.
He knew what they were thinking.
Is it him?
Could it be?
The resemblance really was quite striking. He had the same blond mop-top, the same bedroom eyes, the same succulent lower lip.
He even styled his wardrobe after Thomas, the photographer his doppelganger had played in Blow-Up. The white pants and powder-blue shirt rolled up to the elbows. It was a good look for him.
The shirt matched his eyes.
And eyes are the windows of the soul.
Reg never looked birds in the eye though; he always focused on their lips. Eventually they’d notice and ask, “What?”
He’d always say, “You have the most beautiful lips.”
It worked a treat, that line.
Is it him?
Could it be?
He glanced over at the girls and flashed his second-best smile at them, which was enough to make the fat one blush but the spotty one looked back at him boldly and licked her lips while making intense eye contact.
Well hello, Reg thought.