I used to work for a now-defunct weekly newspaper called the L.A. Reader. I was a general assignment reporter there, which meant I covered everything from hearings on mosquito abatement policies (just as fascinating as it sounds) to best Halloween costumes.
Occasionally, I snagged a crime story. The last crime-related story I covered was a report on a very special meeting of the local Parents of Murdered Children group.  They were meeting with the state's Attorney General and they had some questions to ask and some bones to pick.
One of the attendees was Dominique Dunne's mother Ellen.  (Dominique would have been 52 now. Next year will be the 30th anniversary of her death.)
Ellen Dunne died in 1997 and this was a decade earlier than that and she was already extremely frail and wheelchair-bound. She must have been a great beauty in her youth and even pain-ravaged and grief-stricken, she had an immense presence. 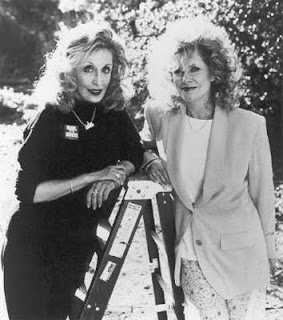 I sat through the meeting, listening to the parents tell their stories and listening to the Attorney General try to deflect their anger.  "The man who killed my son did five years," one man said. "Why shouldn't I kill him?  I can do five years standing on my head." The room was  not with the AG when he pompously suggested that would be a bad idea.
I was not a great crime writer and this experience was actually the one that soured me on reporting news. I switched to features and then I switched to fiction and I've never really looked back.
But that doesn't mean I don't love true crime.  I'm not as avid about it as my friend Berkeley, but a well-written crime story is a thing of beauty.  And the queen of that is ...

EDNA BUCHANAN.  Edna Buchanan wrote for the Miami Herald and covered thousands of crimes.  She was tough, smart, and savvy.  And she was GLAMOROUS.  Even now, as a woman of une certain age, she's got it going on.
She won a Pulitzer for general reporting in 1986 and a slew of other awards for both her crime reporting and her fiction. I've never read any of her novels but I loved both The Corpse Had a Familiar Face and Never Let Them See You Cry, her memoirs about working the crime beat. The late, great Elizabeth Montgomery starred in several television movies based on these non-fiction books and she copied Buchanan's signature look of touseled hair and big sunglasses. (See the above photo.) You can download Buchanan's short story "Red Shoes" from Mary Higgins Clark's mystery magazine here.

The second crime writer I adore is Ann Rule, who is probably the queen of true crime. The first book of hers I read was The Stranger Beside Me, a very personal account of working with Bundy at a hotline and realizing he was a serial killer. Her books practically fueled a cottage industry for television movies and one, Small Sacrifices, about a mother who murdered her children, starred Farah Fawcett.  (It's absolutely unbelievable that when about.com listed the top ten books about psychopathic killers, none of Ann Rule's books were on the list. In fact, there wasn't a woman on the list. Seriously?)
Kate Summerscale is an English journalist who occasionally writes about crime. Her book The Suspicions of Mr. Whicher or The Murder at Road Hill House reads like fiction--finely crafted characters, absorbing plot, taut atmosphere. The crime of the title took place in the 19th century and the detective in question ultimately suffered for his near-obsessive pursuit of justice.
Sue Russell's book Lethal Intent, about Aileen Wuornos, is riveting stuff and so is her earlier book on the same subject, Damsel of Death.  Jeanine Cummins' book A Rip in Heaven is an account of a horrific crime that involved her brother Tom. He and two of his cousins were assaulted one night on a bridge. The cousins were raped and thrown off the Chain of Rocks Bridge outside St. Louis.  Tom survived.  The story of the aftermath is almost as horrifying as the event itself.
This week's news accounts of the legal battle of the "West Memphis 3" is the conclusion to the story chronicled in Mara Leveritt's book The Devil's Knot. It the decision to free the three convicted killers of a trio of Cub Scouts left you feeling a little queasy, read her book and see just how badly the evidence was handled and how the three men were convicted because they "looked good" for the crime. It's an intense story.

Posted by Katherine Tomlinson at 11:26 AM