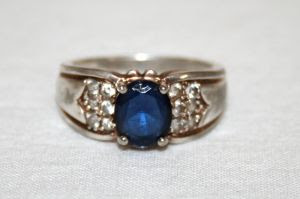 Chuck Wendig's flash fiction challenge this week is "The Flea Market" and I couldn't resist tackling the topic.

Maybe she had a knack, or maybe she had an eye, or maybe Jeannie was just lucky. But she could go to a yard sale with her best friend Maribeth and Maribeth would walk away with a used copy of the one John Grisham novel she hadn’t read and Jeannie would have paid a quarter for a pair of vintage copper earrings signed Matisse-Renoir that she later sold on eBay for $69.
Jeannie had been buying and selling online for ten years as a hobby. The extra cash paid for little luxuries—a massage here, a new pair of shoes there—and came in handy to cover unexpected emergencies like when the Honda’s fuel pump died.
Her husband, who didn’t have what he called “the gypsy gene,” made fun of her for haunting flea markets and rummage sales and yard sales.
Then Tim lost his job and what had been a hobby suddenly became an economic necessity because nobody was hiring 54-year-old ex-grocery store managers and Jeannie only worked part-time at a company that was laying people off and unlikely to give her more hours.
Jeannie began planning her weekends around yard and estate sales, using a “hit list” Tim compiled from ads in The Pennysaver and on Craig’s List. Tim also handled “fulfillment,” turning their garage into a shipping department and buying bubble wrap and mailing tape in bulk.
Tim, who’d really been a very good manager, also created spread sheets and mailing lists and tracking programs to see which items consistently sold for the best prices. Then he created a website and a newsletter to sell to past customers without having to share the profits with eBay.
He opened a Twitter account and created a page on Facebook and threw himself into social media marketing like he was a lonely teenager. He was working 13-hour days seven days a week and he was loving it.
Tim had been so stressed out by his job the last few years that it had been like living with a ghost. Jeannie had been lonely. Now that they had a shared interest it had rekindled the spark in their marriage, a spark Jeannie had thought was dead.
And best of all, while they weren’t making a fortune, they were keeping their heads above water without having to dip into their savings. And every once in awhile, Jeannie would come across something really valuable, like the horrendously ugly china doodad that turned out to be a highly prized mid-century collectible that they sold on Antiques Roadshow for $35,000.
Score.
People approached Jeannie with offers to pay her finder’s fees for a first look at the items she “picked up.” That proved to be a lucrative second income stream and she and Tim discussed the possibility of her taking early retirement and just working from home. The idea was appealing but in the end, Jeannie didn’t want to give up her health insurance. She had high blood pressure and her medicine was expensive.
Still, once the idea had been floated out there, Jeannie couldn’t get it out of her head. She began ranging farther and farther afield in her buying trips. She visited pawn shops and consignment stores off the beaten track. She paid a volunteer at Goodwill to keep an eye out for certain items. She made the rounds of flea markets with computer-generated “wish lists.”
If Tim was busy, she’d go with Maribeth and afterwards, they’d get their nails done or hit the Souplantation for lunch.
Maribeth was absolutely hopeless at spotting “finds” but she loved shopping for bargains and Jeannie enjoyed her company so it was a win/win all around.
Until the Friday that Maribeth spotted the ring in a clutter of junk jewelry piled in a box on a table.
Maribeth was like a magpie—she loved bright, shiny things and the ring was big and garish, with a large blue stone in the center and four clear stones framing its square setting.
She immediately pulled the ring out of the pile, untangling it from the cheap gilt snake chains and the hook from a broken chandelier earring.
It was much too big for Maribeth’s ring finger, so she slid it onto her thumb and modeled it for Jeannie.
“Isn’t it pretty?” Maribeth asked. Jeannie was on the verge of dismissing the bauble with a good-natured jibe at her friend’s poor taste when she took a second look.
What she’d mistakenly thought were rhinestones glittered with a completely gemlike fire. The little diamonds were mere chips but the blue stone—that was worth something.
“Let me see that,” she said casually, holding out her hand.
Maribeth handed it over just as casually, turning her attention back to the pile of bling, looking for another treasure.
Jeannie studied the ring. The gems were set in rose gold in an ornate Victorian design. She estimated the size to be around an 8, which was large for a woman’s ring. She looked inside the ring for an inscription, but the band was worn smooth.
“How much?” she asked the vendor.
“Ten dollars,” he said.
Jeannie scrunched up her face and turned to Maribeth. “Ten dollars seems a bit pricey,” she said, “for a piece of second-hand costume jewelry.”
Maribeth thought about it for a minute. “Okay,” she agreed and put down a brightly colored plastic bangle bracelet that Jeannie’s practiced eye told her was a Lea Stein original.
On their way out of the flea market, Jeannie feigned a bathroom emergency and left Maribeth browsing through handbags as she doubled back to the seller with the Victorian ring.
“I’d like to buy that ring for my friend,” she explained to the vendor, who wasn’t interested. “And that bracelet too,” she said, pointing to the bangle.
“Five dollars,” he said.
“Will you take three?” she countered.
“Four,” he responded.
She tucked her purchases into her handbag and rejoined Maribeth.
“How about lunch?” she asked her best friend. “My treat.”
The ring sold for $10,000.

Photograph of ring by Asif Akbar.
Posted by Katherine Tomlinson at 11:49 PM