The Western as Noir 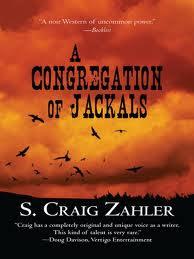 Screenwriter S. Craig Zahler's novel A Congregation of Jackals, is so compelling but bleak that it shares kinship with the Nordic Noir genre of mysteries.

In many ways, this novel reminds us of classic western films like High Noon and the contemporary western Bad Day at Black Rock with a little detour through Deadwood. There are bad guys who are truly bad and good guys who once weren’t and they’re all on a collision course at a wedding. The writer takes his time setting things up and by the time the actual confrontation occurs, it’s almost as mythic as the gunfight at the OK Corral.

The characters are strong. A man named Oswell is the heart and soul of the story and much of it is told through his eyes and in his voice. We tend to expect that he is the one who will die in Montana, though, because he is the one with the most to lose. (The story is a little on the predictable side.)

Some of the characters seem to be a little “quirky” and some aren’t really necessary, but the writer is going for something kind of epic here and that means he’s painting on a broad canvas.

There are some really nice moments between Beatrice and her father, including a scene where he tells her he’s saved all his life to make sure that when she gets pregnant, she’ll have a doctor’s care. There’s clearly love between these characters and we know that he would die for her without hesitation. (We just hope he won’t have to.)

The writer gets major points for populating his West with a multi-cultural cast. There are blacks, there are Asians, and there are Native Americans. Adding these characters adds to the authenticity of the mix. A lot of the ethnic characters don’t fare too well—there’s a messenger named PICKLES who has the misfortune of knowing way too much about Quinlan’s plans—but they add “color” to the goings on.

There are some interesting subplots, like the connection between the Sheriff and the condescending widow. Their original antagonism melts into something else in true romantic drama tradition. There are some little bits of plot that feel completely contrived though, especially the weird encounter Dicky has with the blind man in the hotel.

The author tries hard to get the flavor of the times, often resorting to grandiloquent language (some of which isn’t used quite right). He never quite gets into LITTLE BIG MAN territory, though. On the other hand, it’s clear he’s done a lot of research into the period and there are period touches that really sell the reality of the story and its backdrop.

Some of the detail is astonishing and original—like a description of snake spines woven into the hair of the Appanuqi chief, who walks a leashed and grotesquely tortured Mexican like a pet. The scenes with the Indians—including the massacre that is the “inciting incident” for the whole revenge quest—are tough to read and would be even tougher on screen. The violent way that Quinlan takes over the tribe, beating and humiliating the chief, is only a prelude to what will happen later.

Arthur and his unnamed twin are evil forces of nature and we almost fear them more than we fear Quinlan. (Quinlan feels like he was modeled after Quantrill, the marauding outlaw who terrorized the West after the end of the Civil War.)

The story builds to a shattering climax that isn’t truly original and isn’t particularly surprising. (We always knew Oswell was a dead man walking.) The story-telling, though, is absorbing and while the narrative is a bit predictable and a little derivative, we are carried along. The ending is DIRE.
Posted by Katherine Tomlinson at 10:13 PM