The Mother of Crawly Things 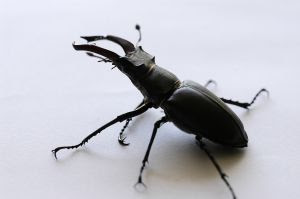 Today is my friend Berkeley Hunt's birthday. As a writer, she is steeped in Star Trek and Lovecraft, and true crime and classic literature. The distillation of those influences is the essence of this incredibly creepy story, which originally ran in Astonishing Adventures Magazine.

The Mother of Crawly Things

“KILL it, you stupid …!” Kevin shrilled. Maddie only stood, frozen not with fear but with fascination. The Mother of Crawly Things alighted atop Tentacle-Face, fixing her brother with eyes like round black stones.
Kevin rolled awkwardly out of bed, scooping up a pair of tighty not-so-whities from the floor. He let fly, snapping them the same way he used to snap towels at Maddie. This time all that happened was that Tentacle-Face hit the floor with a crunch and chunks of painted resin, big and small, shot away in all directions. Better yet, even though Kevin was now spewing the Ess-word—and the Eff-Word too—he sounded exactly like a third grader bawling on the playground.

That's when the Mother of Crawly Things took off for a leisurely circle of the room. Whether it really paused in the air in front of Maddie as if showing itself to her or whether Kevin's bawling somehow heightened Maddie's senses she could never afterwards remember. But what she did recall was that one instant it had the enormous white head and shark-like eyes of a potato bug, the next a pale, snaily face and eyes on stalks. Its body was worm-red and segmented, then an iridescent beetle green. It had no legs at all, then six, then hundreds and hundreds. In their moment of communion she thanked it with all her heart.
Then it was gone, sailing over Maddie’s head on wings that belonged now to a dragonfly, now to a moth. Gone, even though the neighborhood was a rough one and the window was shut and the metal bars that overlaid it locked against the night.
Kevin’s bawling had slowed to an irregular hitching and whimpering and still, somehow, their mother hadn’t heard and come running. His nose ran; spit and snot bubbled at the corners of his mouth. His pajama bottoms—none too clean when he first put them on—were wet with fresh pee. When Maddie left she made a point of looking him deliberately up and down, the look one gives a retard.
She woke the next morning to Mom singing in the kitchen. The air smelled like waffles and her choice of toppings: Blueberries or maple syrup and butter. Mere steps away, the door to Kevin’s room was ajar. Maddie gave a careful push and peered it.
The old shag carpet had been trampled flat, as if by millions and millions of tiny feet. A yellow garden spider with one leg missing was trying to extract itself from one of the worn loops. A furry black caterpillar used its many front legs to drag its mashed back end. The old barbecue grill lay across another patch of rug, one gooey as if from the progress of hundreds of snails. Bits of wing and carapace and jaw littered the bed, so many that Kevin’s empty pillow was smashed flat beneath their weight.
Maddie closed the door on the vacant room and headed for the kitchen. She loved waffles.

Posted by Katherine Tomlinson at 10:55 AM