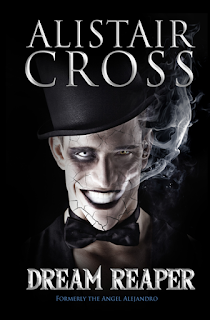 Remember the heyday of the Gothic novel, those books that all had the same cover--with the beautiful long-haired woman running from a castle/mansion/tower with one lighted window? (Here's a Pinterest board that proves my point.)

I gobbled those books up like  chocolate-covered cherries. The sub-genre is having something of a comeback right now and that is really good news for readers because the neo-Gothics are a lot more complicated and compelling than the Bronte imitators that spawned the first wave of books back in the Seventies.

And I'm not even counting the O.G. Gothics, a list of which you can find here.

Which brings me to Alistair Cross and his novel Dream Reaper. Cross brings the goth with a capital G and this book delivers angels, demons, holy hell, and dark desires.

The story takes place in a fictional California town where a new Chief of police has just arrived. Nick Grayson is looking for a fresh start but his initial impression of Prominence is not promising. He's afraid he's going to be bored to death with only the town's Fouinder's Day festivities to look forward to. (Town mascot Winkie the golden hedgehog figures prominently.)

Just one day in, however, weird things start happening, and Nick finds himself caught up in a battle between good and evil. (Cue the Stones' "Sympathy for the Devil" as you start to read--you'll see why.)

The characters in Dream Reaper are fully fleshed out and real. Readers will immediately be caught up in heroine Madison's story because we know what we need to know about her before she has the accident that kicks off the narrative. Although the story takes place in present day, all the trappings and tropes of Gothic novels are in place. There are haunted rooms, whispering voices, an abandoned church, a cemetery with wrought-iron fences, and more. Dark secrets and hidden needs fuel the action as the battle between good and evil plays out. There are real stakes here--eternal stakes.

There are intense moments, as when a woman randomly admits to her greatest sin and several other women attack each other over a man neither one truly wants. The heroes and heroines of the story are all flawed, even broken, and that adds to their believability.

The horror here is lightened with levity, and quirkiness, and emotions run the gamut. It's a terrific read.

Posted by Katherine Tomlinson at 12:57 PM