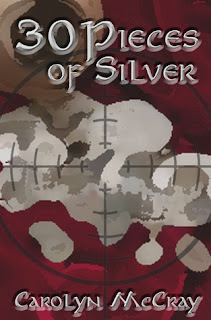 There is a heresy at the bottom of 30 Pieces of Silver,  Carolyn McCray’s thriller, a nicely worked out bit of (alternate?) history that’s bolstered with tons of bogus academic papers and made-up artifacts that feel persuasive. As the story plays out along two timelines—the present and two thousand years ago—the pace never flags, and there are action beats that build and build and build and build from the moment we meet Rebecca Monroe being squeezed to death by an anaconda to the final explosive revelation.

The special ops team central to the mission is familiar in concept—like James Rollins’ Sigma Force—are not just warriors, they know their science and their religious history. Characters keep underestimating them and it’s a lot of fun to see them thwart those snooty expectations. It’s also fun seeing military people being portrayed as something more than meatheads. (Once an Army brat, always an Army brat.)

It is a little disappointing that Rebecca is just about the only woman with anything to do in the book. While she does some brave things and she is an intriguing person, she doesn’t necessarily drive the story—Brandt and his team do. Still, you have to love a book that combines all these thriller elements so seamlessly with an ancient backstory. Worth the read if you’re a fan of Clive Cussler, James Rollins, and Dan Brown.

Posted by Katherine Tomlinson at 12:08 AM