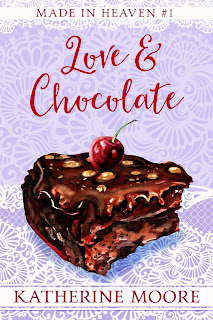 It's a thing and in normal circumstances, I'd be all over the recipes being posted. (I especially like the recipes for quick breads because bread is the staff of life and it's ALL good.) But I'm living in a household with someone on a strict diet and I'm not mean enough to fill the place with good smells. (I  used to live in an apartment overlooking a grocery store with an in-store bakery. When they baked their cinnamon rolls and honey bran muffins, it was all I could do not to run over and buy a dozen. (They also fried their own chicken, which was even worse. And it was GOOD fried chicken.)

So, not doing any baking. But that doesn't mean I can't write about baking and live vicariously. About a year ago I bought a series of cozy covers from the awesome Lou Harper of Cover Affairs. They were meant to be cozy mysteries, but I decided instead to make them cozy romances in the vein of my Halliday Theater and Meredith Manor Hotel stories. (And by "my," I mean books written under the name Katherine Moore. I borrowed my pseudonym from my maternal grandmother. My other grandmother was also named Katherine, called Kate, so I still have a 'sudo on reserve if I need it.)

The stories are set in the small town of Heaven, Washington--a place not unlike the small Pacific Northwest town where I actually live. I've already fallen in love with the characters and am having a lot of fun pairing them up and adding recipes. (I used to be a food writer and was the "Chocolate Editor" for Bellaonline.com for a year. I've also worked as a caterer. So food is one of my passions.)The books are going to have a lot of really good recipes (I am friends with a woman who's just been voted one of the top pastry chefs in Portland), but here's an instant gratification recipe that's a variation of those "cake in a cup" recipes you can find online.

Less than five minutes after you walk into your house, you can have a serving of freshly made chocolate cake on your plate. It’s made in a coffee mug in the microwave and it’s so easy it’s like a magic trick.

Mix the flour, sugar and cocoa powder together in a coffee mug. Add the egg and stir it in.

Add the milk and the vegetable oil. Mix well.

Microwave on high for three minutes. The cake will rise out of the top of the mug like a mushroom. Let the cake sit in the microwave for two minutes (long enough to check your phone messages or sort through your email).

Remove from mug (it should slide right out) and enjoy.

Note: Make sure you use a micro-wave proof mug—you don’t want the mug to crack half-way through the cooking.

Posted by Katherine Tomlinson at 11:23 AM