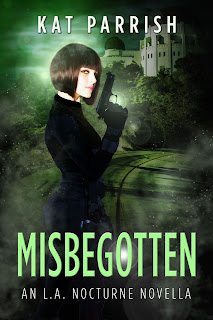 Yes, it's shameless self-promotion day.  I have just released MISBEGOTTEN, which is a novella and the first in a series of books set in my L.A. Nocturne universe. This is a paranormal LA in which vampire family vie for position against the most powerful family, which operates out of Griffith Observatory.

There are werewolves and ghouls and fae. the book began with a short story called "Tired Blood" that appeared in John Donald Carlucci's Astonishing Adventures Magazine back in 2007. I found I really loved the characters and the world and in the decade since then, I wrote enough paranormal short stories to fill an entire collection:  L.A. Nocturne Collection: Tales of the Misbegotten.

My protagonist, Kira Simkins, is a crime reporter who specializes in paranormal crime. She has her own blog, which was originally conceived in the manner of Nikki Finke's "Deadline Hollywood," which really rose to promminence during the 2008 WGA writer's strike. It's called paracrimes.com and I actually own that domain name, though not sure what I'm going to do with it.

I was originally inspired by Laurell K. Hamilton's Anita blake series, which I remember embracing with the fervor of a religious convert. I had never read anything like her books (it was really before "urban fantasy" was a thing).  This first story deals with the uproar that occurs when the head of a vampire family dies under peculiar circumstances that may or may not relate to a series of vampire on vampire murders occurring in the Southland. I'm really rather pleased with the results.
Posted by Katherine Tomlinson at 3:10 PM