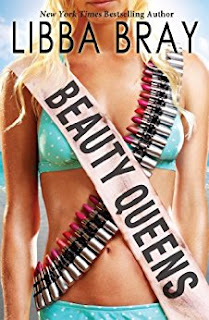 There’s also a part of us that sees the story more like one of those parodies of contemporary movies, like Vampires Suck.  Adding the satire to the comedy is not necessarily a commercial choice.  (Two hilarious satires about politics, Election and Dick were both disastrous at the box office ($15 million and $6 million returns, with no international distribution), and this satire seems to have an even more narrow focus.)  Also, the shows that are the targets here seem like somewhat dated topics—having been done to death in Comedy Central and Mad TV and SNL and … many other places.

The characters are a lot of fun, though, even if they’re not necessarily original. A lot of the best of the character stuff is internal, as when one contestant sizes up her competition for the “ethnic” card of the pageant and another takes charge of the girls with her firm conviction and endless supply of philosophy culled from books by her idol, Ladybird Hope, the most famous winner of the Teen Dream Pageant.  (She’s a running gag all the way through the book that pays off nicely at the end.)

Some of the really best moments in the book come in the form of Bray’s hilarious footnotes that explain who various characters and situations are.  The narrative is sometimes a mess, especially when a particular subplot is introduced.  The story actually resembles some cheesy television movies about hot girls thrust into survival mode, but those were played straight.  Here things just seem to be made up as they go along.

Still, Bray keeps things moving along in an amusing way and the ending is a showstopper. This is very different from her Gothic-tinged historical novels and a lot of fun.

Posted by Katherine Tomlinson at 11:25 PM