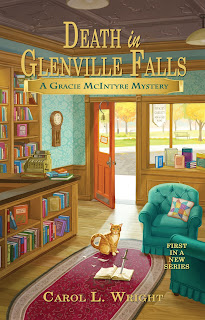 Carol L. Wright is a former domestic relations attorney and adjunct professor. She is the author of articles and one book on law-related subjects. Now focused on fiction, she has several short stories in literary journals and award-winning anthologies. Death in Glenville Falls is her first novel.

She is a founder of the Bethlehem Writers Group, LLC, is a life member of both Sisters in Crime and the Jane Austen Society of North America, and a member of SinC Guppies, PennWriters, and the Greater Lehigh Valley Writers Group.

She is married to her college sweetheart. They live in the Lehigh Valley of Pennsylvania with their rescue dog, Mr. Darcy, and a clowder of cats.

Your first Gracie McIntyre mystery is out this summer. Can you give us a sneak preview? Who is Gracie and how does she run into a mystery?

Yes, thanks! I’m so excited to have my first mystery, Death in Glenville Falls, come out August 29.

It’s about former attorney Gracie McIntyre who left the practice of law eighteen years ago, following the death of a client in an apparent murder/suicide. Since then, she’s been a stay-at-home mom and part-time professor at the local college where her husband teaches history. Now that her son is off to college and her daughter has started high school, she is ready for a new challenge. But opening a new-and-used book shop gives her more than she bargains for—especially after a young woman appears, reminding Gracie of the past she’s tried to leave behind.

Days after the grand opening, Gracie’s store comes under attack. What’s worse, she suspects a police officer might be behind it. As violence escalates, she is forced to investigate on her own to save her store—and possibly her life.

How did you transition from your law career to writing fiction?

I’ve always been a writer, and even did a stint as a book editor for a couple of years. But as a lawyer and academic, most of my work was legal or technical writing. It was actually my younger brother who urged me to write fiction. He remembered how I used to invent adventurous bedtime stories for him as he was growing up. (It must have helped to ignite his imagination, too, because he writes fiction as well.) As I began to explore fiction writing, I found it enormously fulfilling. I think he thought I would write children’s fiction, so was a little surprised when I started writing mysteries.

Your short fiction has been collected in numerous award-winning anthologies. Do you find it hard to “switch gears” when you go from short to long fiction? 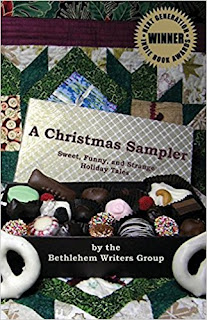 Not really. Aside from the obvious difference—the amount of time it takes to write a short story vs. a novel—there are some other significant differences between long- and short-form fiction. In a novel, you can develop your characters more fully, and weave in a more intricate plot, so the rewards of long-form fiction are great. But there’s nothing like the relatively immediate gratification you get from writing a short story that you’re really happy with. You can also explore some characters or genres you might not be willing to spend an entire novel with, so in that way, writing a short story is recreation and a welcome break from the hard work of novel writing. Last year, I even published a middle-grade story. What fun!

(Check out Carol's work in A Christmas Sampler, A Readable Feast, Once Upon a Time, and Once Around the Sun.

Are you a member of a writer’s group? Do you belong to Sisters in Crime? Have you ever been to a writer’s convention?

Writing is such a solitary profession, I can’t imagine doing it without being part of a community. My writers group is the Bethlehem Writers Group, LLC
(http://bethlehemwritersgroup.com). I get great advice and ideas from that group of talented authors in a variety of genres. I am also a member of Sisters in Crime and the SinC Guppies subgroup. They are extremely supportive of their members in every way. I know if I have mystery-specific questions, I can find answers there.

I have been to several writers conferences over the years, from the Iowa Summer Writers Festival to Malice Domestic and many more. It’s a great chance to get together with people who understand what it’s like to be a writer and don’t look at you funny when you ask questions about lethal concoctions or how to get rid of a body.

Who are your favorite writers (not necessarily mystery writers)?

I love so many of my fellow mystery writers that I wouldn’t try to list them all for fear of leaving someone out. As for other writers, I love Jane Austen (and am a Life Member of the Jane Austen Society of North America), and enjoy other classics as well. For more contemporary fiction writers, though, I like those who make us see life, history, or literature from a different perspective, such as Connie Willis, Jasper Fforde, Hilary Mantel, Alice Walker, Michael Crichton, Anthony Doerr . . . I could go on and on. I also love the work of many nonfiction writers, both for research and for pleasure.

How would you describe your story (“The Dark Side of the Light”) in the Day of the Dark collection? 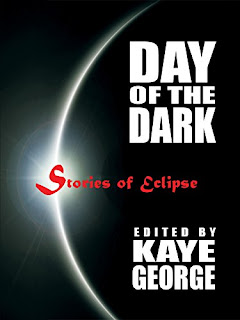 My story is about the darkness and light of the eclipse occurring at the same time that a husband and wife, who had each kept the other "in the dark" about some life-altering information, reveal their secrets to one another. But it does not necessarily follow that being "enlightened" results in happiness. In fact, there can be a “dark side of the light.”

Have you ever seen a total eclipse? Will you be able to see this one?
I’ve seen a partial eclipse, but never a total eclipse. (It’s very accommodating of the cosmos to bring one so close to so many Americans this year, don’t you think?) I would have to travel to get to the path of totality this year, since I live in Pennsylvania where we’re only expected to see about 75% coverage. Still, I have my eclipse glasses. It ought to be a good show! 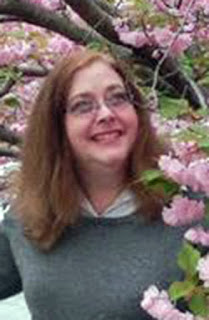 Are you a morning or night person and when do you write?

Definitely a night owl. I don’t think it’s at all unusual for people to find their imaginations to be most alert when the house is dark and others are asleep. It’s no wonder that it’s always at night when children imagine monsters under the bed! Besides—it’s easier to hear the voices of your characters when all is quiet.

Do you listen to music while you work? If so, what?

I usually work in silence. I find music can distract me and interfere with the creative process. But on occasion I will listen to music when editing. When I do, it is usually classical music—nothing with lyrics. Something about the precision and structure of classical music seems to go with the exacting task of editing.

What’s next in your writing queue?

So many things! I am working on short stories for some additional anthologies, but the best is the next Gracie McIntyre mystery, Death in the Ivory Tower, which will be out next year. I also have a stand-alone novel floating around in my head, demanding to be written. I’m sure I’ll have to give it my attention one of these days.

Posted by Katherine Tomlinson at 3:46 PM