A meme is worth a thousand words 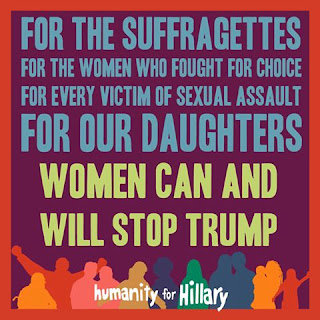 I've worked in a sexist business since I was in my 30s. If I blushed every time a man used the C word or the P word around me, I'd  be permanently beet red. I've heard producers candidly dismiss actresses because they weren't sexy enough (or because they didn't want to sleep with them and as Rachel Maddow would say, "That's not the word they used.")

I saw one of Donald Trump's female surrogates on CNN yesterday defending what he said on the leaked Access Hollywood tape as just being the way people in Hollywood talk. And you know--she wasn't wrong. There are people in Hollywood who do talk like that. But they're not running for president.
Posted by Katherine Tomlinson at 3:07 PM