Judging a book by its cover--Bigstock and me

You know you've been spending too much time on the various photo stock sites when you're sent a book to review and your first thought is not, "This looks like an intriguing book" but, "I have that exact photo myself!" This happened to me recently and it got me to thinking about covers in general. I can't remember where I saw it but about a year ago a site was posting photos of traditionally published covers side by side to show that art directors at the Big Six were using the same images over and over. There were two in particular--one a shot of a snowy landscape leading to a manor house and one a portion of a woman's body in some vaguely medieval/Renaissance period dress. (The infamous partial torso images have come in for a lot of heckling.)

Everyone agrees that readers DO judge a book by its cover, but what makes for a great cover?  I like clean lines and great fonts. I spend a lot of time on Pinterest, and many people have "book covers" boards, which are great sources of inspiration if you are creating your own covers for books. The two most striking covers I can think of are the covers for Twilight and Memoirs of a Geisha. Both were incredibly simple and both were memorable. the thing is, the stunning Memoirs of a Geisha cover wasn't the first cover used. the original cover was the one seen to the left. It's elegant and beautiful but it isn't sexy, not in the way the updated cover was. 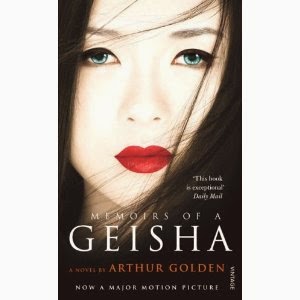 The book sold a lot of copies and was adapted into a movie, but it would be really interesting to know how many copies of the book sold with the old cover versus the new. Look at the covers together. Which one would you rather read?
Posted by Katherine Tomlinson at 8:13 PM