May Flowers...Lauren Willig's The Secret History of the Pink Carnation 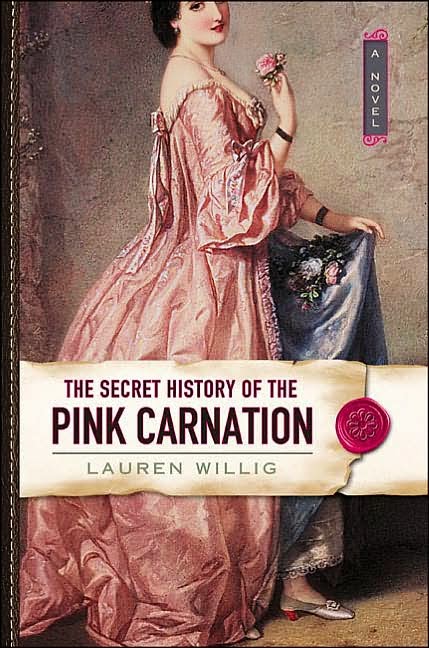 In Lauren Willig’s The Secret History of the Pink Carnation, a lovelorn American historian stumbles across a series of letters that unmask a historical mystery and tell another love story.

ELOISE KELLY is a Harvard-trained historian spending a year in England researching her dissertation.  It has a bland title that got it past the committee (something to do with aristocratic espionage during the 19th century) but what she really wants to do is unmask the identity of a spy known as THE PINK CARNATION. Unlike the Scarlet Pimpernel and the Purple Gentian (two other aristocrats who saved others during the French Revolution), the Pink Carnation’s identity has never been revealed.

Desperate for information, Eloise has resorted to sending out letters to the descendants of the Pimpernel and the Gentian, in hopes that the families might have some information for her.  She sent out almost two dozen letters but received only three replies.  One was a form letter with the times the Scarlet Pimpernel’s home is open to the public.  One was a letter from Mr. COLIN SELWICK clearly discouraging her interest in his family.  And one was a letter from MRS. ARABELLA SELWICK-ADDERLY inviting her to tea.

The dual time-frame story that unfolds from there manages to avoid most of the pitfalls of most such stories (an unbalanced narrative where the past story is more engaging than the contemporary one as it was in both THE FRIENCH LIEUTENANT’S WOMAN and POSSESSION) but the story that takes place in the past really is a romp.

That section of the novel reads like a regency romance, with a dash of old fashioned books like THE SCARLET PIMPERNEL and THE COUNT OF MONTE CRISTO thrown in.  (One of the conventions of this book is that the Scarlet Pimpernel was a real person and that his masquerade inspired imitators like the Purple Gentian and the Pink Carnation.)  There’s also a strong dash of Jane Austen here, and the writer seems to be having a great time.

The double sets of lovers—Colin and Eloise in the present; Richard and Amy in the past—are types we’ve seen many times but Willig makes the obstacles to their relationships engaging and entertaining. We like Eloise and are curious to know how her story turns out. Amy (the Elizabeth Bennet character) is headstrong and spoiled but she’s also smart and brave and resourceful.  She and Richard are a perfect match and we know that the moment we see them together. (We also suspect that Richard’s formidable mother will approve of Amy.)

There’s talk of this book being turned into a graphic novel, and that could be a lot of fun too.
Posted by Katherine Tomlinson at 5:32 PM