EVERY PARENT'S WORST NIGHTMARE comes true in the opening pages of Kimberly McCreight's debut novel Reconstructing Amelia. Stressed single mother Kate is called out of an important meeting at the law firm where she works as a litigator to deal with an emergency at the private school her teenage daughter Amelia attends. Kate's told that Amelia has been suspended, starting immediately, and that makes no sense because Amelia is not a trouble maker, not the kind of kid who gets suspended. Kate gets to Grace Hall expecting some answers, but all she gets is more questions because by the time she arrives, her daughter is dead, apparently as the result of a fall from the roof of an administration building. 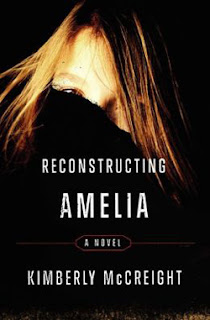 Later Kate willl be told that Amelia was caught plagiarizing an essay on a Virginia Woolf novel and that makes no sense either because Amelia was her mother's daughter, an academic overachiever who loved Woolf so much she posted quotes from her on her Facebook status updates. Kate only learns about the Facebook updates later, when she's desperately panning thorugh the electronic debris trail of her daughter's life in search of clues that might explain why Amelia is dead. The convenient answer is suicide and Kate is almost okay with that until she gets an anonymous text that says, "Amelia didn't jump." Those three words change Kate's perspective and as she focuses her grief and channels her anger into her investigation, she learns more than any parent ever should about the secrets Amelia was keeping.
This is a terrific debut novel that offers readers the same insight into the world of teenagers who aren't quite as grown up as they'd like to be, as Megan Abbott's The End of Everything. Amelia is a cmplex, complicated, layered character and as we, and Kate, learn more about her, we see that she was on a trajectory leading to tragedy long before anyone could have seen the warning signs. The answers to Kate's questions about how Amelia ended up on that roof and what really happened drive us through the narrative, but really, it's the young characters and the intensity of their inner lives that keep us engaged. The publisher (and some of the reviewers) have labeled this a "literary mystery," but that's really just a backhanded compliment saying that the writing is smart and self-assured. If you're in the mood for a character-driven mystery that's more interested in the WHY of the death than the WHO, Reconstructing Amelia is the book you want.
Posted by Katherine Tomlinson at 10:08 PM