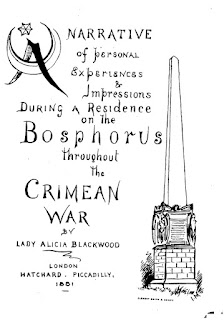 These days women writers who travel to foreign lands are not considered adventurers. They're either tourists or journalists or wanderers or seekers.  And that's too bad because there was a wonderful tradition of women travelers coming back from far-flung places with terrific stories of discovery and observation.
Over at A Celebration of Women Writers, they're currently showcasing Lady Alicia Blackwood's A Narrative of Personal Experiences &  Impressions During a Residence on the Bosphorus Throughout the Crimean War (1881).  The full text of Lady Blackwood's book is here.  Lady Blackwood was an interesting woman, a painter and a nurse who was commissioned by Florence Nightingale herself to create and run a hospital for wives and widows and children of soldiers. You can learn more about her here. 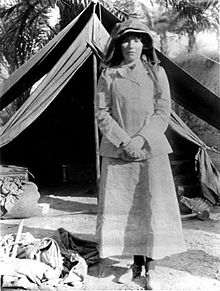 Then there was Englishwoman Gertrude Bell, archaeologist, aristocrat, friend to T. E. Lawrence and very possibly a spy. A woman who refused to accept limitations, she was very well respected by the Arabs she encountered, who were mostly wary of Brits.  Her Arabian Diaries and personal papers make fascinating reading. Georgina Howell has written an excellent biography of Bell called Gertrude Bell, queen of the Desert, Shaper of Nations.(She was there when Iraq was born as a nation out of what had been Mesopotamia.)

My personal favorite woman adventurer is Freya Stark.  She was born at the tail end of the 19th century but came of age in the 30s. She worked a nurse in Italy during WWI and then started traveling around. 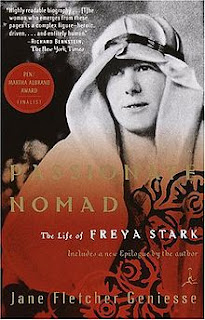 I first read her Valley of the Assassins when I was in high school. The book chronicles her trip (with just a single guide) in wild areas between Iraq and what's now Iran. She went places NO MAN HAD GONE BEFORE.  I loved that. She was often sickly but she was fearless and she became one of the most famous travel writers of her generation. She lived to be 100 and when she was 77, she published an account of her last expedition, a trip to Afghanistan. (The book was The Minaret of Djam: an Excursion into Afghanistan, which is still in print.)

These women kindled my love of travel--I'm never without a valid passport--and I just wish I had their courage. (The adjective most often applied to Gertrude Bell was "intrepid."  I'd like to be intrepid.)
Posted by Katherine Tomlinson at 6:57 PM