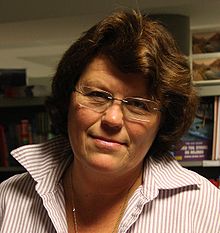 You like Nordic Noir?  Looking around for something to read now that you've hoovered through Jo Nesbo's oeuvre? You might want to check out Anne Holt, a remarkable Norwegian writer whose background includes a stint as a Minister of Justice, a news editor and anchor and a lawyer. She's also a mother.
She made her fiction debut in 1993 with Blind Goddess, a novel that kicked off a series "starring" Hanne Wilhelmsen, a lesbian police officer.
I'm currently reading What is Mine, the first in a series of mysteries featuring Adam Stubo and Johanne Vik.  It's a really dark story involving child-napping and murder, with a subplot about a man wrongfully convicted of the same sort of crime decades ago.
Holt is Norwegian, although she's spent time in both the US and France, and her work reflects the Scandinavian attitude toward sexual equality. In What is Mine, a little girl casually mentions that her grandmother is an electrician, a job that is still, at least in the US, more likely to be man's work. the fthers of the children involved in the plot are all directly involved in their upbringing, and in some cases are more nurturing than the mothers.  Adam is a widower whose wife and daughter died in a horrible accident that's almost ludicrously unlikely, but he is incredibly tender with his grandson and with Johanne's mentally disabled child Kristiane.
From the first time Johanne and Adam meet, there's a frisson of sexual attraction, but it is not without complications. These people are adults and their lives are complex and they have pasts and they have responsibilities, The portrait of Kristiane is an excellent fictional portrait of a child with a mental disability, right up there with the autistic characters in Speed of Dark and Memoir of an Imaginary Friend. No one quite knows what's going on with Kristiane and her mother is driving herself crazy looking for answers.
Holt has written a number of books in the almost 20 years she's been a novelist and she's one of the best-selling writers in Norway.
She's on Facebook
She's got an author page at Simon & Schuster's site..
Here's a podcast where she talks about her new Hanne novel (a locked-room mystery).
Posted by Katherine Tomlinson at 11:54 PM