Review of Memoirs of an Imaginary Friend by Matthew Green 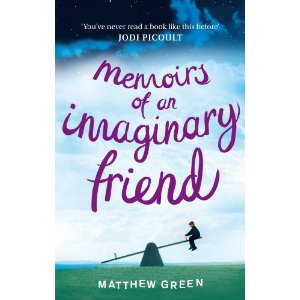 Budo is Max Delaney’s imaginary friend, and in fact, his only friend. Max dreamed him up when he was four and he’s nine now, so Budo worries that the boy will soon forget about him and leave him to fade away to whatever afterlife waits for the discarded. Budo is worried for himself but he’s also worried about Max, a “special” kid who is very smart but often gets emotionally “stuck” and acts out with screams and tantrums.
Budo doesn’t sleep but Max has imagined he can walk through walls, so at night, when the boy sleeps, he roams the city, visiting a corner gas station to watch the interaction among the humans and a hospital where other imaginary friends congregate.
Life isn’t easy for Max, who attends public school and has to cope with bullies like Tommy Swinden, who lives for the opportunity to beat him up. (Budo’s supposed to keep watch when Max is in the bathroom, but he can’t always be there.)
In fact, while Tommy is a threat, the biggest danger to Max is someone a lot closer to home and when he disappears from the school while separated from Budo, his imaginary friend panics.  What happens next is a heroic quest to save the boy, with Budo organizing a posse of imaginary friends to save the day.
This is a terrific book on so many levels.  The portrait of Max as a special needs kid is both matter-of-fact and unsentimental.  He seems to be a high-functioning Asperger’s Syndrome child with his need for ritual and structure and rules.  Budo knows how Max thinks and his explanations for things are on a child’s level—with observations from watching television and adults thrown in.  (When his friend Dee ends up in the I See You, we understand what he’s talking about immediately but are also charmed by Budo’s thought that it must be a place where people watch you to make sure you’re okay.)
Max and Budo are GREAT characters, but so are all the other characters here—from Max’s parents to the teachers at school, to the other imaginary friends who help Budo rescue Max.  There is absolutely nothing “cutesy” about these imaginary friends, even when some of them look like splotches on a wall, or a hair bow with eyes or a spoon or, as in Teeny’s case, like a fairy.  As we’re reading we just make the adjustment and the characters soon feel perfectly human.  There is a hint of the sadness that permeated TOY STORY 3 in the way imaginary friends know their days are numbered (Budo is almost six and that’s really old for an imaginary friend), but there’s also a sweetness to the resolution that’s more happy than sad.
There are real-life situations that cause Max grief—from people who try to make him talk when he doesn’t want to, to bullies like Tommy who end up with poop on their heads.  Tommy is a genuine bully and when he tells Max he’s going to kill him, we don’t think he’s exaggerating.  Budo watches out for his friend, not just because he loves him but also out of enlightened self-interest. If anything happens to Max, he’ll die too.
And bad things do happen to good people here.  Graham’s gradual fade-away is very moving and so is a scene where Budo encounters a newly born imaginary friend who is sitting vigil by the side of a deeply injured little girl.
These imaginary friends are brave and they are true and they are the best characters we’ve seen in a long time.  The human characters are wonderful as well.  Max’s dad John just wants a son who’ll play catch with him and is in deep denial about his son’s emotional health. (Max does not grasp the concept of “catch.”)  Max’s dad is a man who is often browbeaten by his wife, who’s the primary breadwinner, but when it’s important, he mans up and becomes, as Budo says, “the boss of the family.”
Mrs. Gosk, the teacher who is strict but really loves her students is the teacher we all wish we’d had.  When Budo sneaks into the teacher’s lounge to listen to her speak with the other teachers, we see how angry and helpless she feels after Max disappears.  She wants people to mobilize and find the boy.  Mrs. Patterson is also a layered character and not just sneaky and sly.  She has a reason and a purpose for everything she does.  And there are moments when we, like Budo, can almost pity her.
There is a lot to keep us occupied until the main plot kicks in—the fear of Tommy’s retaliation, the setup of the imaginary friends and Budo’s other human interactions—and once Mrs. Patterson starts taking Tommy out of school, we KNOW she is up to something shady.  Watching her lie and lie and lie is fascinating and we fear for what will happen to Max.Watching Budo come out of his comfort zone and interact with Oswald, the imaginary friend whose human friend is a brain-damaged adult kicks the story up into a whole new level.
The depiction of Max’s condition is superb, the best view of the autism spectrum since THE SPEED OF DARK.  This book is really something kind of special.
Posted by Katherine Tomlinson at 12:00 AM